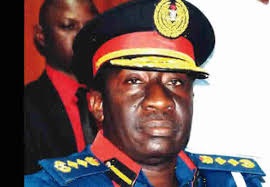 By Tola Gbadamosi
|
The Ondo state Command of the Nigeria Security and Civil Defence Corps (NSCDC) has decorated  72 newly-promoted senior officers with their new ranks.

Performing the ceremony at their Akure office, the State Commandant NSCDC, Christiana Abiakam-Omanu, who represented the Commandant General  of the Corps, Abdullahi Muhammadu, said that the promotion was a yearly exercise aimed at motivating and encouraging the staff for better service delivery.

The Hope gathered that the number of officers promoted this year happened to be  the highest so far in the command as the promoted junior officers will soon be decorated.

She stressed that the promotion would enable the officers to surmount security challenges in the country.

“For those who are not promoted now, it is not that they are not qualified, but sometimes, promotion is subject to availability of vacancies.

“You should not be discouraged or deterred, but I want you to be rest assured that you will definitely get promoted soon.

“Another examination is coming up soon. Everybody cannot get promotion at the same time,” she said.

The commandant, urged the newly-promoted officers to see their promotion as a higher responsibility and to be more diligent in their services to the nation.

Two of the newly-promoted officers, Chief Superintendent of Corps Samuel Oladapo and Principal Inspector of Corps Okunoye Olutoye, appreciated the Commandant-General for counting them worthy to be among the promoted officers.