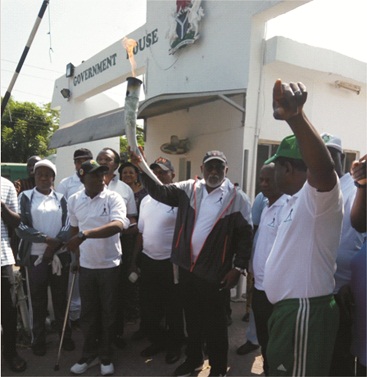 Akeredolu made the disclosure while receiving the 19th National Sports Festival Abuja 2018 Torch of Unity at the Government House in Akure yesterday.

He explained that the festival, which would commence on December 5th, was a way to bring everyone together as sports was dear to the hearts of Ondo State.

Describing sports as a veritable means of national integration, the Governor hinted that it serves as one of the only avenue that would continue to unite the world.

“Our participation in the 19th National Sports Festival is a manifestation of our avowed commitment to sports development in the state, and in Nigeria.

“It is a known fact that sports remains a veritable channel for harnessing youth energies just as they are good avenues for interaction and Social integration among athletes of this nation.

“This is no doubt desirable for our great nation which is beset with a myriad of sociopolitical challenges.

“I am also using this medium to assure you all of Ondo State government’s commitment to full participation of the state athletes in the 19th National Sports Festival,” he said.

Earlier, representative of the National Sports Commission (NSC), Mr Olufemi Ajao said the torch was to sensitize the mind of the people of Ondo State that the festival had come to stay.

He explained that there wouldn’t be any more postponement or shift in date of the festival.

“By December 5th, the big torch will be lit in Abuja to herald the beginning of the sports festival that will last for like 10 days.

“I would like to implore that Ondo State has a better representation at the sports festival,” he said.Also, former Nigerian sprinter and two time African championship gold medal in 100 metre Seun Ogunkoya received the Touch of Unity from the representative of National Sports council Mr Olufemi Ajao and gave it to the acting General Manager of Ondo Sports Council Mr Wande Fabuluje who handed it to the  Commissioner for Youth Development and sports Mr Saka Yusuf Ogunleye who later hands the Touch to the Governor .

Commissioner for Youth and Sports Development, Hon Saka Yusuf-Ogunleye commended the Akeredolu-led administration for according the sport sector the priority and attention it requires, having recognized the roles sport plays in the social empowerment of teeming youths in the state.

“While new facilities are built, old ones are being given face-lift to meet international standard. Funds are also released to attend national and international competitions while the athletes and coaches are performing brilliantly well in their chosen sports

“It is in view of this that Governor Akeredolu approved substantial amount of money for our participation at the 19th National Sports Festival tagged Abuja 2018.

He explained that the ‘Torch of Unity’, which symbolises peace and unity, is being taken round the capitals of all states of the Federation to herald the Festival and transmit the message of peace and brotherhood among the people of Nigeria.

He said the receiving the Torch of Unity by the Governor has underscored the importance attached to Sports Development by the present administration.

The Acting Manager of the OSSC Mr Wande Fabuluje while speaking with the newsmen , said he appreciated the Governor and his cabinet to deem it fit to receive the Torch with joy and funfare , it really show the love he has for sports development.

He said with the Governor on ground receiving the “Torch of Unity” it will serve as a morale booster for the athletes and their officials.

I’m assuring the government and the people of Ondo state that we will do them proud in the Festival and making sure we bring as many medals to the state .

Others are Special Adviser to the Governor on Public Utilities, Mr Tunji Ariyomo, Special Assistant to the Governor on Political Matters, Tunji Fabiyi, Acting General Manager of Ondo State Sports Council, Mr Wande Fabuluje and some athletes who have done Nigeria proud in both national and international competitions.

One of such athletes is Seun Ogunkoya, who is Nigeria 100m National Record holder and African fastest man (1998-2000) and the 2nd fastest in the world within those period.

It would be recalled that Ondo State came sixth on the medals log at the 18th sports festival hosted by Lagos, tagged “Eko 2012”.bv