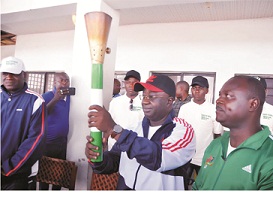 By Femi Atolagbe
|
Nasarawa State Governor, Engr. Abdullahi Audu Sule has received the 2020 National Sports Festival’s Torch of Unity in Lafia ahead of the 20th Edition of the Festival to be hosted by Edo State.

Team Nasarawa’s athletes’ captain, Beauty Timothy, received the Torch at the entrance gate in Lafia from the North Central Zonal Coordinator of the Federal Ministry of Youth and Sports who doubles as leader of delegation, Saka Akeem.

Delivering the message of the Governor, Deputy Governor, Dr. Emmanuel Akabe, thanked the delegation and organizers of the National Sports Festival and the host State, Edo, assuring that Nasarawa State would be fully represented at the Events in Edo.

“On behalf of the Government and citizens of Nasarawa State, may I commend the Federal Ministry Of Youth and Sports headed by a visionary, Mr. Sunday Dare, Honourable Minister, and his powerful team for the great job you are doing in keeping our youth population busy and engaging them in meaningful venture, which will, no doubts, help to mitigate or curb social vices in the society”, he began.

“As the home of sports and tourism, Nasarawa State has achieved so much and impacted enormously in the sports sector in Nigeria and will keep doing so.

“We have produced some of the best regional, national and global sportsmen and women for podium height.

He assured organizers of the Festival of Team Nasarawa’s participation.

“Kindly convey our assurances to the Minister and the  host of the Festival, Edo State, that Nasarawa State will participate in the events with a large contingent and is aiming to win it.”

The Festival Torch will now move to the North-East, starting from Bauchi State.

The 20th National Sports Festival, which is a biennial event, will commence from 22nd March and end on 1st April, 2020, in 22 venues in Edo State, with the 36 States of the Federation, including FCT, Abuja, all taking part.