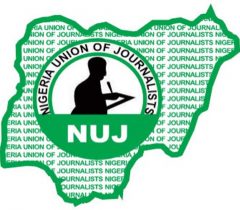 By Fatima Muraina
|
The Nigeria Union of Journalists (NUJ) has commended the Ondo State Government for adequate funding of the Public Service Training Institute (PSTI).

The state council Chairman of the Union, Mr Adetona Aderoboye gave the commendation during a courtesy visit paid on the Management of the Institute at Ilara Mokin in Ifedore Local Government Area of the state.

Aderoboye, who led the state leadership of the union, also commended government for the establishment of the institute which he said has become a household name in the state .

His words: “I salute the courage of government for making it functional in spite of the financial challenges in the state and the country in general”.

While extending commendation to the management of the institute for making it functional, he urged them to do more to ensure that the facilities in the institute are not underutilised  as he stressed the need for adequate publicity of the institute’s activities in the areas of documentary, news analysis, feature write-ups and jingles for people to know what is happening.

Earlier, the Director General of the  institute,  Mr Kayode Ogundele said the institute has capacity to train professionals from all management and art fields, commending Governor Oluwarotimi Akeredolu for adequate funding of the school to deliver on its mandate.

He described the institute as a millennium training institute, saying that the facilities were funded by the World Bank which gives it the best practices.

Ogundele disclosed that the institute would soon sign agreements with Adekunle Ajasin University, Akungba-Akoko, and the International Institute of Journalism (IIJ) on making use of the  institute as campus for postgraduate and diploma programmes of different personnel from the public and private sectors.