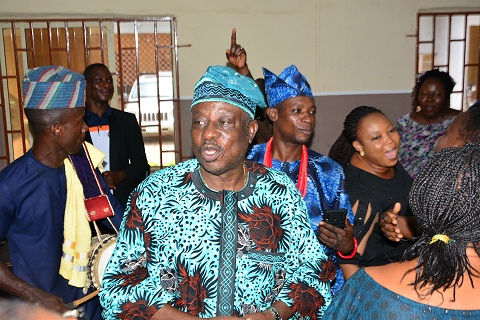 By Saheed Ibrahim and Babatunde Ayedoju

Members of Management, staff and unions in Owena Press Limited, publishers of The Hope newspaper yesterday rolled out the drums to give their Chairman/Editor-in-Chief, Sir Ademola Adetula a rousing welcome from vacation and to mark his 70th birthday.

The surprise birthday celebration was organised by the management and staff of the company. This was shortly after the Executives of the Nigeria Union of Journalists (NUJ), Ondo State Council, led by the Chairman, Prince Leke Adegbite, paid a courtesy call on him.

He said, “we are very happy to be associated with you because you are one of the leading lights of journalism in Nigeria. The current president of NUJ was here, even though he didn’t visit many media executives but visited you because you are special.”

Adegbite disclosed that the visit was in fulfilment of a promise earlier made. He said that his team chose to commence visits to media establishments in the state with Owena Press chapel because the chapel is very key to NUJ in the State.

His words: “Among the best crop of Journalists in Ondo State, both past and present, we can’t pick the first three without mentioning Owena Press Limited. In the history of NUJ in Kwara, Ondo States and even in Nigeria generally, you stands tall, as it’s not easy for anybody who heads a media organisation to be reappointed twice.

“As a union, we have the capacity to fight a non-performing or unfriendly executive, but you are different. Since your appointment, we’ve seen many changes which are obvious.”

While commending the management of Owena Press and the contributions of the NUJ chapel members to the state council elections, Adegbite pointed out that the organisation has trained its best hands for leadership position, beyond writing news.

He appealed to the Adetula-led administration not to relent in providing good leadership. He also informed his host that, following concerted efforts that were made in the past, the state government had taken steps to pay the gratuities of retired staff of Owena Press Limited.

In his response, Sir Adetula noted that NUJ Ondo State Council had made the right choice of a chairman, saying, “his pedigree has prepared him for the job. His family has a pedigree of fighting for the oppressed. Since he became chairman, I’ve been observing his activities and I am not in any way disappointed.”

Adetula charged NUJ members to work for the common good of the union for the sake of the members.

Speaking on a new dawn in the organisation, he opined that the focus of his administration is to make a better journalist out of every staff. According to him, this can be seen in the way the organisation has been producing highest numbers of award winning journalists in recent times.

While advising the union to strive to be better, he praised the union for the efforts made and the success recorded concerning the payment of retirees’ gratuities.

Dressed in his usual native attire and a matching cap, the birthday celebrant could not hold back his joy and elation, he said, “I feel so joyous and excited. I am extremely happy. I was kept in the dark about this ceremony until I came this morning (yesterday).

“My joy is that out of your volition, you honoured me. I am happy. I thank you most sincerely. I cannot thank you enough. You have given me more inspiration”.

Sir Adetula further appreciated the gifts presented to him, praying each of the staff would also live long and be celebrated.

While attributing his success to God, Adetula said, “I will be a bunch of ingrate if I cannot say I am grateful to God. Looking at my journey in Owena Press Limited, I have every reason to thank God. He has always been there for me.”

He said, “It’s a new day and a new dawn for Owena Press Limited, if only some of us will take it as our responsibility to make this place great. Until I leave this place, I have resolved not to compromise because to compromise is to go backwards.”

While expressing his appreciation to his family,  Adetula admonished the workers to give their children the best education they could afford. He also prayed for them that they will reap the fruit of their labour over their children.

He equally reminded everyone of his resolve to prioritise the welfare of staff, while asking them to work for the progress of the organisation.

This was followed by refreshments and gist time for the staff present. He admonished the staff to also move closer to God.“It is a new dawn for Owena Press Limited and it will move from grace to higher grace.

“I cannot believe I am 70. When the governor called and asked  me are you sure you are 70, I told him we went to the same school. 70 years remind us of one thing, nobody lives forever,” he stated.

In his short address, the Editor, Mr Akin Adubuola, thanked God on behalf of the celebrant. According to him, “We are not just celebrating Sir Adetula, we are celebrating good, exemplary and visionary leadership, right from the first time he piloted the affairs of the organisation.”

Speaking further, Adubuola said, we want to appreciate you for lifting Owena Press from the pit of disintegration. We are better and we can still be better. No matter the challenges, I am optimistic that in few months to come, we will get better.”

After a short prayer session for the Editor-in-Chief and the entire staff, there were  presentation of gifts to the celebrant, The NUJ chapel also presented gift to the chairman, anchored by the Editor. Not left out was the NUPPPPROW chapter, led by Mr Adeniran Omolade.