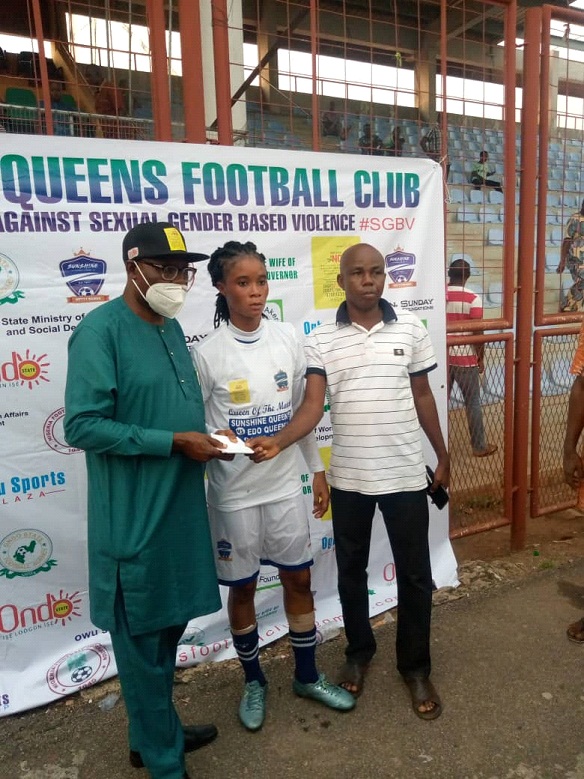 The Ondo State Commissioner for Youth and Sports Development, Mr Dotun Owanikin has assured Sunshine Queens fans that the attacking force of the team will be fortified for optimum result.
He stated this after the Queens played a goalless draw with Edo Queens in the match day four of the Nigeria Women Premier League (NWPL) decided at the Ondo State Sports Complex, Akure the state capital.
According to him, they played very well in the encounter ,but we must reinforce the team with good attacking players to bolster the attack.
The Commissioner commended the Most Outstanding Woman of the Match, Sunshine Queens Defender ,Demehin Oluwatosin for building a strong rock at the Queens back four.
“She was very fantastic today, all we need now is to inject two new attackers into the team to make it balance.”
Cash prize was presented to her by the Commissioner for her excellent performance.
The Coach of Edo Queens, Rollanson Odeh praised the match officials for a job well done.
He said he came to Akure for maximum three points, but was happy to cage them to a barren draw.
The cagey encounter saw little chances created by both sides, the home side had to make a first half substitution to ensure that the pressure from the visitors was subdued to go into the half goalless.
The second half produced few chances to ensure that both teams shared the spoils.
Sunshine Queens now recorded four points from four matches .