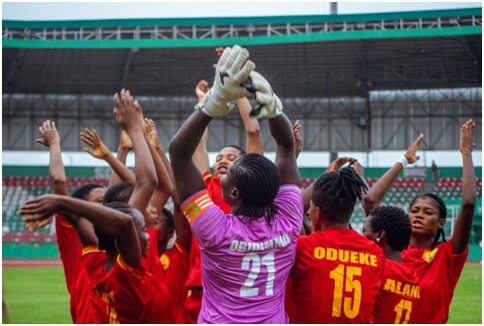 Edo Queens Football Club will today, continue her winning run in the Nigeria Women Football League (NWFL) Premiership when they take on Adamawa Queens football club at the Samuel Ogbemudia Stadium, Benin in Week 4 of the 2022/23 season.

The Obaseki girls have since their 1-0 defeat in the hands of Nasarawa Amazons on matchday 1 returned to winning ways with two consecutive wins – 4-2 over Confluence Queens and a 2-1 away win over bitter rivals, FC Robo in Benin and Lagos respectively, scoring 6 goals in the games.

The Moses Aduku-led girls will go into this game with a good psychological edge over their opponents who haven’t recorded a win against Edo Queens in their last four encounters.

They will go into the match with all seriousness in their bid to topple their opponents who currently sit second on the log – both sharing six points.

Edo Queens on the backdrop of their away victory at Robo will hope to make it count for the second home match when they take on the rejuvenated Adamawa Queens tomorrow.

Adamawa Queens no doubt will push for a good outing hoping to go top of the group or maintain their second position before the end of the year. With the team already in Benin since Sunday, their ambition to leave Benin with a favorable result is obvious in the air.