Home News NWPL: ‘We are in Lagos for serious business’ 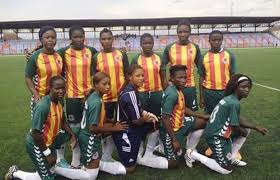 By Femi Atolagbe
|
The team manager of Sunshine Queens  football club of Akure, Mojisola Adekanye has said, it is the dream of the four participating teams at this year’s NWPL super four showpiece to lift the league trophy since it is one team that will emerge a winner.

Mojisola was answering Questions from newsmen at the team’s hotel in Lagos ahead of today’s opener between her team and Bayelsa Queens.

“We are not in Lagos to make numbers, we are determined to get things done and we strongly believe God will lead us right.”

Sunshine Queens Qualified for the super Four playoffs having finished second in the abridged league weeks ago.