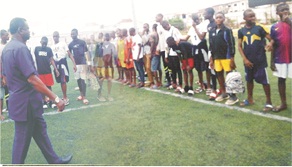 By Femi Atolagbe
|
In a bid to avoid a repeat of the ugly experience in Ibadan during the zonal elimination for National Youth Games (NYG)slated to commence  in Ilorin next month, Ondo State Sports Council (OSSC) yesterday  screened the athletes that would don the state colour at the competition.

Recalled that Ondo state qualified for two of the five sports they featured at the zonal elimination in Ibadan while they were screened out in other three sports event.

The screening exercise which took place at the  State Sports Complex in Akure, the state capital was supervised by the General Manager of the State Sports council, Mr Wande Fabuluje and other top management staff of the council.

Fabuluje while addressing journalists at the screening center said the bitter experience of Ibadan made them to internally screened the athletes to ensure that Ondo contingent do not present over age athletes that will be later screened out at the national youth games in Ilorin.

He added that himself and other top management staff of the council were involved in the screening exercise by physically inviting the athletes, to boost the chances of the state contingent.”

He added further “that if left in the hands of the coaches alone, they might include over age players because of their zest for victory which may later hurt the state at the main competition in Ilorin.”

According to him, any state that were screened out during the competition will pay (N200,000)Two Hundred Thousand Naira fine as part of the rule of the competition”.

“So in order not to run foul of the rule of the game and to be on a safer side, we have to do the right thing at the right time to avoid putting the state in to unnecessary debt”.

The General Manager added that,” neither the management nor the coaches will be in the screening center  t when the external officials will be doing the justice to each state contingents.

“That is why we emphasised that we will not allow what happened in Ibadan to repeat itself again, we want to ensure that we go the National Youth Games with real under -15 athletes,” he added.

He said emphatically,” that those screened here today won’t be screened out again, my self and other officers here had involved in many screening exercise, so I’m very sure these athletes will scale through the screening in Ilorin.”