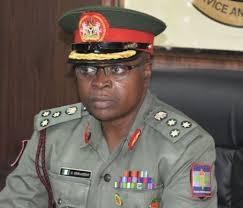 From Victor Akinkuolie, Ado-Ekiti
|
The Director-General of the National Youth Service Corps (NYSC), Brigadier General Shuaibu Ibrahim, has cautioned Corps members against illegal use of social media which he said may jeopadise the good name of the scheme and the country at large.

He  made the call at the weekend while addressing members of the  2019 Ekiti state Batch B, Stream “II” corps members at the NYSC Permanent Orientation Camp, located. at Ise-Orun/Emure-Ekiti.

The NYSC DG who was in the camp as part of his familiarisation tour to all orientation camps in the country. During the visit the NYSC boss I companied of the State Coordinator and other top officials took an inspection tour to the camp’s clinic, kitchen and other camp facilities.

Addressing the parade, the Director General admonished the corps members to adhere strictly and contribute to the development of cultures and traditions of various commuties in the places of their primary assignments.

He stressed the needs for them to use the knowledge acquired during the three weeks orientation programme to promote unity among the various ethnic groups in the country.

The NYSC helmsman while congratulating the corps members over their enrollment in the scheme, enjoying them to see themselves as ambassadors of the nation by rendering selfless service for national development and transformation.

He advised them to always see themselves as role model in every community they may be posted to for their primary assignments.

The Dorector General equally advised them to refrain from all forms of social vices, such as cyber-crime, robbery, smoking, sexual harassment and other negative vices, which he said could jeopadise the good image of the scheme.

He congratulated them over the success of the orientation camp, urged them to pay greater attention to all skills and training acquired during the programme and transform it into use during their service year.

The Director- General said the need for them to be identify with community leaders, security operatives youths and other relevant organisations in the places of their primary assignments has become imperative, in view of the security challenges currently facing the county.

However, charged them to be security conscious by reporting strange faces and movements around them to the security officers.

He stressed the needs for them to adhere to the dress code as laid down by the management of the NYSC in their local governments and wear the white and green uniform to the places of their Community Development Services (CDS) activities.

The NYSC scribe warned the corps members not to embark on any unauthorised journeys out of their State of deployment, lamenting on what he called repeated cases of motor crashes among member of the NYSC in recent time,  said “as from now on it is mandatory for every serving corps members to take permission from the appropriate authority before embarking on any journey”

Speaking on the contribution of the scheme to the growth and development of the country, the NYSC boss, said members of the corps has developed various communities and villages and as well provide amicable solutions to various challenges since it was introduced in few years back.

The Director General was accompanied to the camp by the Director in charge of Special Duties of the NYSC, Mr Afolayan James, NYSC Ekiti State Coordinator, Mrs, Emmanuella Okpongete, NYSC Camp Director, Mrs. Fagbemi H.T and other notaable camp officials.