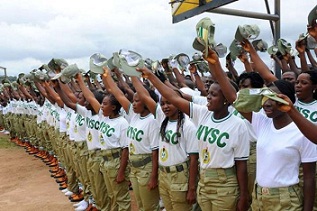 From Fisayo Akinduro, Osogbo
|
The National Youth Service Corps, (NYSC) in Osun state, have presented an award of outstanding performance to Oladapo Atoyebi for embarking on cucumber plantation in the state.

Oladapo, who is of batch B, Corps member in Isokan Local Government Area planted cucumber on an hectare of land in the state.

The award was presented to the Corps member during the closing ceremony of 2019 Batch ‘C’ Stream I orientation course at the NYSC permanent camp, Ede.

The state coordinator, Adegoke Adewale in his remarks reiterated the commitment of the scheme towards redirecting the career ambition of youths through skill acquisition and entrepreneurship.

According to him, the notion behind exposing corps members to such programmes while on camp is to create viable alternative for them in the future against seeming unavailability of white collar jobs.

“NYSC management has gone a long way to ensure a brighter future for you after the service year by introducing Skill Acquisition and Entrepreneur Development Programmes , purposely to empower you to be self-reliant.”

While narrating her experience, Atoyebi said she approached the head of Ikoyi community for land and the request was granted, alongside other supports from the people in the community.

“When I came to camp, I attended a program called SAED, in my course of the programme, I chose Agro-allied and they told us about Cucumber farming.

“With the skills acquired, on June 19, 2019, after the camp, I ventured into cucumber farming, and it is really going on well,” Atoyebi said.