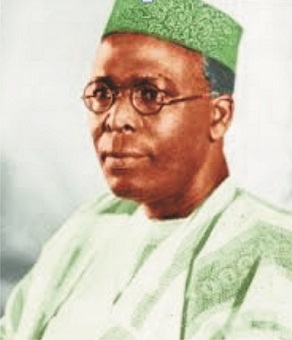 By Ayodele Fagbohun
|
Since the transition of the late sage, Chief Obafemi Awolowo on May 9, 1987, the cohesive, impregnable and invincible larger Awolowo political family has been witnessing noticeable cracks with eventual dispersion of Awoists to various political persuasions, either by their own volition or circumstances dictated by the reality of the ever changing moment.

The junta really broke the nerve of the old politicians, were rendered hors-de-combat to present a  united and formidable common front against crude military dictatorship and oligarchy.

Some old politicians  who groaned under the excruciating economic hardship were at the mercy of the ruling class looking anxiously and desperately for petty contracts and obsequious patronage  to keep body and soul together. They scrambled for the crumbs of bread that fell from the opulent table of the military masters at the helm of affairs.

Such was the despicable and pathetic lot of an average old politician otherwise called the old brigade in Nigeria under review shortly after the exit of the great avatar, Obafemi Awolowo.

Lest we forget, the military junta still accorded some modicum of respect and reverence to some erstwhile Northern politicians like Alhaji Maitama Sule, may Allah (SWT) grant him Al-Jannah Fir’ daus, whose invaluable   service were recognized and well utilized regardless of his relatively old age.

General Babangida vented his spleen on old politicians (the  old brigade) by clamping down a blanket ban on them from taking active role in the ensuing political encounter. It is irksome that the grosteque ban gave the old brigade a pariah status that likened them to a fish cash out of water to rot away and die of atrophy.

The old brigade had no choice than to swallow the trash hook, line and sinker and continued to run from pillar to post in vain searched to be in the mainstream and for political relevance.

Whilst the Awoists dismally lost the battle to put their house in order, restrategise and rally round a standard bearer from their own stock, in person of Lateef Jakande, the former Governor of Lagos State and “Baba Kekere” of UPN fame, they jettisoned LKJ, held  Uncle Bola Ige in  contempt and declared him persona non grata and  threw their support variously in favour of non Awoists Olu Falae and business mongu, MKO Abiola for no ideological or any cast iron reasons.

This arguably marked the beginning of the end of  all latent troubles, cold war and grave political crisis of confidence that visibly shook the fortunes of the dominant governing party the Alliance for Democracy (AD) as a true and credible off shoot of Obafemi Awolowo legacy.

For it was a clear departure from the staunch principle of first come, first served; strict adherence to core party discipline and supremacy that usually informed just and fair distribution of positions to the inner caucus in spirit of cult or religion which any organ ascribed to  Awolowo  was widely reputed for.

The rigorous discipline that was the hallmark of Awolowo political outfits in both the  First and Second republics did not give room for any form of treachery, ill-feelings and washing dirty linen in the public which the leadership of  the present ruling political  parties at various  levels  of government, celebrate as festivals in the current political dispensation.

It will be recalled that Obafemi Awolowo at the age of 40, founded the Nigerian Tribune in 1949 to fight political oppression in Africa  and to propagate his political belief which has remained an undying force throughout the Balck race.

Obafemi Awolowo, as a budding and full fledged politician, deployed Nigerian Tribune into nationalist activities to free Africa from the bondage of colonial rule and British imperialism. During the struggle for  emancipation of Africa form colonial, domination two doyens of African independence namely the president of Republic of Ghana, Dr Kwame Nkrumah (God bless his soul) and the late premier of Western Region, Chief Obafemi Awolowo crossed swords on modus  operandi for good government in nascent independent African nations in the post colonial rule.

Whilst Nigerian Tribune based in Ibadan, the then capital of Western Region, was critical of the policies of the  Convention People’s Party (CPP) government in Ghana led by Dr. Nkrumah; papers controlled by the CPP government of Ghana were also critical  of  the Action Group  (AG) party government in Ibadan. Such was the invisible prowess of The Tribune that some venal and literary hirelings as bird of passage wanted to sacrifice easily on the alter of political expediency.

It is unfortunate that some Awoists returned to their vomits and become ideological turncoats and irritants aligned wiht the conservation of the Peoples Democratic Party (PDP), thus acquiesced in the political brigandage, economic mismanagement and ranked felony across the country for 16 years of PDP misrule.

The foregoing hideous looting of government coffers went on unabated and with impunity to reduce to sheer nullity the heroic struggle and feats of Awolowo in crystallizing life more abundant in term of bequeathing 4 cardinal point programmes to ameliorate the life of the masses.

Awo’s memory shall ever be evergreen. who were the villains that pulled down ‘s statue at the Government Secretariat, Agodi, Ibadan?

Obafemi Awolowo built Ibadan as New York City in United States (US), even at the risk of making hyperbole, a paradise on earth!

Some people, out of plain ignorance and mischief used to call Awolowo names for utilising the proceeds from cocoa produced in Ekiti area to develop and transform Ibadan to the disadvantage of the farmer. The cocoa House built by Awolowo government, the first high rising edifice ever known in the whole black race. Why for goodness’ sake some people constitute themselves paid agents and blacklegs to rewrite the political history of Yoruba race whilst side tracking the truth.

The truth was the pathetic and sorry state of filth, slum and the criminal neglect of Ibadan once reputed as the largest city in Africa after Cairo.

Ibadan the political capital of yoruba race was a mere shadow of its former glory. No thanks  to the election riggers in the PDP who stole the people’s votes and imposed violent rule on the people.

History and posterity shall not definitely absolve those  people and institutions behind the volte face of Nigerian Tribune to renounce its traditional  and noble role as the voice of the voiceless.

When  the cabal killed Alfred Rewane, Awolowo’s political associate and the financial backbone of progressive politics in Nigeria, the voice of Tribune was as tenuous and mufled as not exacting the desired result  on the cold blooded murder.

It is queer and incredible that Tribune is not being fair to LKJ nor doing the memory of the slain political martyr, Uncle Bola Ige proud. Hardly could the paper do any spotlight on LKJ the long serving former Managing Director of the company (ANNPLC) and a dogged follower of Awolowo in 12 calendar months. Even Papa Awolowo is  hardly mentioned as expected on Sunday Tribune newspaper which was my Sunday tonic until recently.

How  on earth could Awolowo’s paper, Tribune be the mouth piece of the  then ruling administration of People’s Democratic Party that was million kilometers away from the problems and challenges facing the toiling masses. The cost of education  was and still very high and outrageous  in some PDP controlled states, Ogun state inclusive where Obafemi  Awolowo hails from. An affront to the memory  of  the late sage.

Nigerian Tribune  in its front page once splashed the photograph of  one Isiaka, unknown political quantity masquerading as governorship candidate with the governor of Ogun State, Gbenga Daniel and Mama Chief (Mrs) HID Awolowo. What a  wicked and sacrilegious offence in exploiting old age and more annoying the exit of great Awo to perpetuate a fraudulent, asinine and irresponsible government on the people for another four years having  wasted eight years on in-fighting voodooism and frivolous wasteful projects that  have no tangible bearing to the material well being and welfare of the people.

Still exploiting its pedigree as authoritative newspaper, the Tribune lied; spread obfuscation b painting the former Lagos Governor, Asiwaju Ahmed Bola Tinubu as a hater and rival  of Immortal Awo.

Recently in the wake of preparations ahead of the just concluded general elections, Senator Bola Ahmed Tinubu, out of sheer humility and deference paid homage and coutesy call on the national leader of Afenifere, Chief Reuben Famuyide Fasoranti OFR in his Omolere,  Akure residence.

Obafemi Awolowo, a philosopher king who worked harder than his peers and the present crop of ill-organised politicians. He traversed all the nooks and crannies of the country canvassing for votes. He was pilloried and his votes stolen in the dark by the very cabal the Tribune writers now eulogise  and adulate to the high heavens. What an irony and unkindest cut to the memory of the dead!

The deprivation of Awolowo’s daughter, Dr. (Mrs)  Tokunbo Awolowo-Dosunmu from flying the flag of Lagos State governorship under the defunct  Social Democratic Party (SDP) in the aborted 3rd Republic was indeed a set back for the progressives. It resulted in the   loss of Lagos State to the conservatives and the emergence of Otedola as governor. It was a costly  mistake of the  head not of the heart and a great lesson for the progressives.

What an inscrutable tale of paradox for Nigeria Tribune founded by Obafemi Awolowo, hitherto revered for its truth, objectivity, fairness and its sudden after the  demise of the late sage, metamorphosis in strengthening  a decrepit and sanguinary oligarchy in Nigeria. Whilst the Awolowo’s family who received the baptism of fire from the very tyrannical cabal both in the  First and Second republics are still very around! May they live long to correct the travesty in the Tribune.

Although, Chief Obafemi Awolowo is dead physically, his impeccable, imperishable legacies still linger on and  could never be ignored inspite of the futile efforts of the aberrant PDP administrations in the South West though shortlived and their taskmaster, ex-president General Olusegun Obasanjo to obliterate the good works and memory of the late sage for life of the righteous shall flourish like palm tree.