Obasanjo as father of Fulanisation 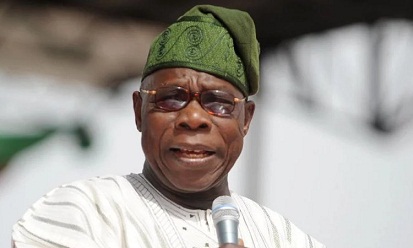 Obasanjo as father of Fulanisation

By Ayodele Fagbohun
|
He who comes to equity must come with clean hands runs a legal parlance.  I stand to be corrected that General Obasanjo is the head-fountain of fulanisation and islamisation whatever bogus name called in every political dispensation mid-wived by his primary military constituency.

Obasanjo would have been taken more serious as a well meaning patriot not caring a hoot for the consequences of his action and somewhat candid statements uttered ex cathedra if he had chosen up North ravaged by Islamic uprising and where Muslim fulani predominate.

Obasanjo as Head of State and ex president deliberately sowed the seed of fulanisation insidiously germinated and ripened to a fearsome magical old tree ready to consume its victims and clients at the slightest provocation.

Before the debut of the unfortunate military rule that exponentially is responsible for the present unchecked insurgency and gangsterism, there was proven record of relative peaceful co-existence among the diverse people of the country; the occasional skirmishes to the contrary notwithstanding.

Indeed, the Biafran war of secession was eventually resolved and the nation remains indivisible and indissoluble sovereign political entity not until precious lives and valuable properties destroyed on the battle field and little innocent children cut down at their prime by kwashiorkor.

It was in the 19th century (1804) that one learned Fulani clan head, Sheikh Usuman Dan Fodio by virtue of his sound Islamic jurisprudence launched a holy war (jihad) against the persecution of Muslims by his pagan overlord; thus changing power configuration in the North.  The Fulani hijacked the political authority of the region and by extension boasted to dip Qu’ran to the sea; threatened to overrun the entire country.

Dan Fodio, a charismatic and magnetic personality relied devout muslim whom the settled Fulani were predominant and proclaimed holy war.  He was a humble and pious man of Islamic faith.  He did not want political power. Fodio, however divided the secular empire between his son, the first Sultan of Sokoto and his brother, Emir of Gwandu.

We are told Fulani expansionist policy of imperialism was halted militarily in the North East by the Kanuri of Bornu.  It is now very disheartening and unfortunate this people of noble and warlike ancestry have lost the charm, aura and innate power to secure their territory from the predatory and anarchistic Islamic insurgency funded by international conspirators and the local quislings poised to truncate destroy our territorial integrity and the hard won sovereignty.

Coming down to January 15, 1966 political upheaval which shook the whole country to its very foundations and claimed the lives of some dramatis per sonae of the First Republic.  The list included the late Prime Minister, Alhaji Balewa, the Norther Premier, Sir Ahmadu Bello, Sadauna of Sokoto; Premier of Western Region, Chief Samuel Ladoke Akintola; Minister of Finance, the late Chief Okotie-boh and a host of their trusted lieutenants in the Army that gave backing to the notorious wicked oligarchy and feudalism.

The leader of the revolution, the First coup de tat, Major Kaduna Chukwumah Nseogwu was a Roman Catholicism by faith; born and bred in Kaduna.  In accordance with his Roman Catholic’s doctrine, Major Nseogwu vowed a rule of celibacy in his chosen military career not to go into wedlock until the nation was rid of endemic corruption, graft, avarice and tribalism.  Without mincing words, Major Nseoguw valiantly defended the coup insisting that the leading politicians killed in the wake of the coup deserved to die for bringing shame to the people and inflicting violence and untold deprivation and hardship on the nation in all its ramification.

Major Nseoguwu however promised to install progressive government in Nigeria.  He and his group would set up the machinery and worked out the modus operandi to release Chief Obafemi Awolowo and his political associates languishing in prison on trump charges of treasonable felony to overthrew the ousted federal government of Balewa.

Alas! That tall dream was thwarted with the entry of reactionary forces, neo-colonialist agents from the remnants of the conservative clique just overthrown; and the bloodthirsty, insolent Northern soldiers on the revenge mission on the inevitable killings of January 15, 1966.

All these strange bedfellows in unholy alliance finally clamped down more ignoble more bestial than the corruption infested and ridden government of the First Republic.

In his pretence, General Obasanjo claimed to be a friend of Major Chukwumah Kaduna Nseogwu the fallen hero of January 15, 1966 revolution who had gone into history as the acclaimed fighter of progressive government in the country.

Obasanjo belongs in spirit and soul to reactionary cabal; very obsequious and sympathetic to the cause of Fulani expansionist oligarchy in spite of the minority status of the Fulani as elucidated and expressly stated in this pierce and the numerical inferiority compared to other linguistic and ethnical nationalities put down resident in the defunct Northern Nigeria.

Obasanjo and his cohorts installed Alhaji Shehu Aliyu Shagari (a Fulani) less prepared for the presidency.

In his ip se dixit, General Obasanjo as the military head of state said that the best candidate (referred to Chief Obafemi Awolowo (a Yoruba) might not win in the radio/television network broad cast, on the eve of the ill fated 1979 presidential election.

Ever since, the does not relent by any jolt in rabidly promoting the cause of fulanisation he is now shamelessly calling on Nigerian to bewared of.  Obasanjo is the embodiment and personification of indiscipline traceable to the so called fulanisation, a crude concept craftly by him to hoodwink the populace and to curry cheap popularity from the people.

Fulani, a minority ethnic group in the North.  Owing to the education and enlightenment acquired in their environment were able to subjugate their Hause overlords; change their role of underdog to become the imperial master and landlord of Hausa community.

To allay the alleged fear and suspicion of ethno religious domination, free and compulsory education as inalienable right to citizenry must be introduced by governments (federal, state and local) throughout the federation without further delay.  Nigeria as a secular state as enshrined in the constitution must not be trampled upon.

A word is enough for the wise.