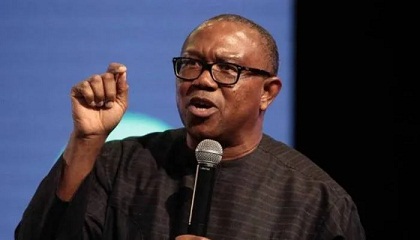 The Presidential candidate of the Labour Party, (LP) Mr Peter Obi, has assured the people of the country that he would create more job opportunities for the  teeming unemployed youths in the country, if voted into power during this year presidential election.

The LP presidential candidate equally vowed to guarantee security of life and property and ensure putting an end to poverty and hunger if voted for in the forthcoming presidential election.

The former Anambra State Governor gave the assurance during the recent mega campaign rally of the party held in Ado-Ekiti, the capital of Ekiti State.

The labour party presidential flagbearer urged residents and indigenes of the state to vote for his party to enjoy jobs for the unemployed youths.

Obi assured the people that his administration would end insecurity, corruption and  irrelevant political structure that is putting Nigerians in bondage of hunger.

According to him,  “I want to assure you that if you vote for me as the next president of Nigeria, I will unite and secure this country.

” I will end hunger, poverty and provide good jobs for numerous unemployed graduates in Nigeria.

“My administration will move this country from consumption to production and bring the dividends of good governance to the door steps of the citizens.

“I will not only stop corruption, I will eradicate poverty in every state of the federation because our youths will be properly taken care of and they will no longer be travelling out of the country for greener pastures.

He urged them to vote for Obi in the forthcoming presidential election because he is reliable, dedicated, committed and ready to fight for the survival of the youths and Nigerians.

Similarly, the State Chairman of the party, Barr. Odunayo Okunade, advised the party supporters not to sell their votes to politicians or political parties.

Okunade urged them to vote for Obi who is competent, tested and trustworthy to eradicate poverty, hunger, corruption and insecurity in Nigeria.

He assured them that the labour party presidential candidate would never disappoint them if voted for as the next president of Nigeria.