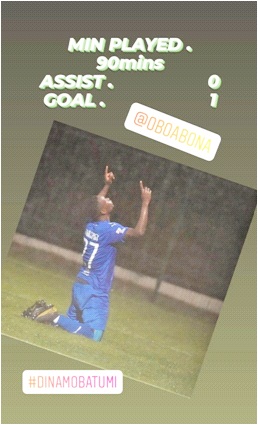 Super Eagles defender, Godfrey Oboabona was on target for his Georgian Clubside, Dinamo Batumi in a premier league away tie against Telaviv FC.
The match which was the 12th of the season for Oboabona provided another opportunity for the 2013 AFCON winning defender to register another impressive performance as he was on the pitch for 90 minutes.
The former Rizespor of Turkey defender has not missed a single minute of action this season as he played full 90 minutes in all the 12 matches by Batumi.
Oboabona scored the 2nd goal as Dinamo Batumi recorded the impressive 3-1 away win over Telaviv FC.
Speaking with journalists after the energy sapping encounter, the former captain of Sunshine Stars attributed the victory to hardwork and dedication.
“Let me give all glory to God Almighty for the victory and appreciate the efforts of our coaching crew and teammates. I also say a big thank you to our fans worldwide. The win is important for our confidence and we hope to build on it.”
Dinamo Batumi is currently placing 1st on the league table with 23 points and the team will square up against Saburtalo FC in its next match on the 17th of October, 2020.