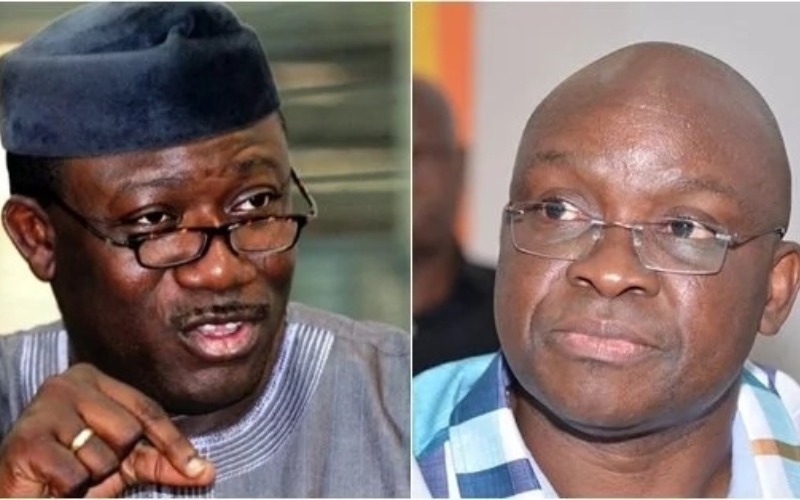 By Gbenga Sodeinde
|
History will be made in Ekiti State come October 16, 2018 as Dr. Kayode Fayemi of the All Progressives Congress (APC) will be sworn in as the 12th Executive Governor of the State.

The outgoing Governor, Mr Ayodele Fayose, will hand over power to Fayemi whom he incidentally received the baton of leadership of the state from on the same day in 2014.

Fayemi who during his first term in office was elected on the platform of the Action Congress of Nigeria (ACN) later became APC and Fayose of the People’s Democratic Party (PDP) are the two top politicians who have the privilege of ruling the 22 years old State for a second term.

Fayemi who was defeated by the incumbent governor of the State in the June 21, 2014 election also in turn defeated Professor Kolapo Olusola of the PDP who incidentally is the Deputy of Governor Fayose, candidate of the People’s Democratic Party in the July 14, governorship poll.

As the handing over day beckons, Ekiti people are anxiously looking forward to when the Governor- elect of Ekiti State, will be inaugurated as the Governor for the second time.

The people are anxiously awaiting the new dawn, hoping that their lives would be better this time around, having been able to compare and contrast the financial position when Fayose took the mantle of office then in 2014 and now that Fayemi is being expected to assume office and restore what many Ekiti are referring to as their lost glory.

It will be recalled that immediately Governor Fayose was declared Governor-elect in the State, rather than pre-occupied himself with the task of how to tackle the myriad of problems confronting the state, he started behaving as if Ekiti had been willed to him as a personal property.

First, Fayose wrote to the banks in 2014 instructing them to stop granting credit facility to Dr. Fayemi for payment of salaries and pensions while he threw all his daily needs and expenses at Fayemi. Fayose increased the peoples’ woes as evident with the debt profile of Ekiti State that was reported to be in the range of N117 Billion now.

The latest Ekiti debt profile was made public recently when the Transition Committee set up by Fayemi submitted its reports. Before Fayose’s inauguration in 2014, record has it that Fayose approached Fayemi to approve funds for him for a trip to Dubai on vacation which Fayemi graciously granted him and two of his aides then.

As if that was not enough, Fayose went to Coscharis Motors to acquire a brand new bullet-proof Range Rover Jeep and a brand new power bike to serve as his outrider without following due process only to pass a bill close of N100 million to the Fayemi’s administration which the then government obliged, all in the interest of peace and smooth take-off of the new administration then.

But now, the Ekiti people have eventually seen the resultant effects of Fayose’s ill preparation as they went through hell throughout the four years occasioned by government inflicted poverty, hunger and backwardness through his decision not to pay salaries while many agencies, industries and Banks that would have assisted in boosting the economy of the state were chased away through obnoxious policies of his administration coupled with heavy tax burden imposed on them.

For Dr. Fayemi, since he has been declared the winner of the July 14 election and the Governor-elect, he has been having sleepless nights on how to achieve Ekiti of his dream in terms of catching up with other financially stable states by making sure that Ekiti is liberated from the shackles of bondage, darkness and chain of poverty.

Fayeymi has since been seeking assistance, cooperation and support of various agencies, parastatals of Federal government, powerful organizations within and outside the country to support his plan of making sure that the crawling state receives life and walk again to glory.

The agencies he has visited for assistance include the AFD (Agency Francaise de Development) for the implementation of the economic development programmes in Ekiti State, investing in private sector development through credit lines for informal and formal including small and medium scale businesses.

The aim is to extend access for SMEs to medium and long-term credit by developing a range of financial products tailored for the needs of the poorly funded entrepreneurial groups, improvement of public finance management by assisting Ekiti State in improving tax revenues and improving the economic environment which is necessary for investments, as well as seeking the technical support and strategy, including any and all measures aimed at improving the ease of doing business that will improve private investments in the state.

He is also seeking Funding opportunities in alternative sources of energy; With all his efforts, Ekiti state is hoping to improve on sustainable (renewable) energy sources for its private sector and proposed industrial clusters in the State.

Dr. Fayemi also visited international agencies to seek for their collaboration in his bid to pro agro-processing equipment aimed at stimulating investment through agro-processing (agri-business) enterprises that will impact on employment in Ekiti State. This would help enhance agricultural productivity of small and medium scale farmers and improve value addition along priority value chains. In addition, it will help human capacity development, employment, modernized machinery and equipment, competitiveness and productivity improvement.

Also, among the Federal ministers that have so far been visited by the Governor–elect to seek Federal Government Intervention on Infrastructure, for Ekiti ahead of his assumption of office include the Minister of Power, Works and Housing, Mr. Babatunde Fashola. Dr. Fayemi out of his desire to ensure speedy development of infrastructure in the state had visited the ministry in a bid to form partnership for the development of the State.

He told Fashola during his visit to him in his office that, “Your ministry is going to be very crucial to the success of our administration, particularly in the area of infrastructural development.

“We have been having discussions on unofficial basis, so, I think it is important we make it official to identify areas we can partner in our rebuilding efforts,” he said.

The governor-elect said that the Federal Government’s activities were being noticed in the State through its ongoing housing, roads, electrification and the Federal Secretariat projects.

Fashola assured Fayemi that the housing project, federal Secretariat project, the transmission project and others in the state would be beneficial to all citizens irrespective of their party affiliations.

The minister said that the projects identified by the governor-elect in the state were initiated even as the opposition party still governed the state.

He said he had visited the state to ensure that the projects were ongoing, adding that the election of Dr. Fayemi would accelerate growth because the governor-elect is more development-oriented.

In his bid to boost food production in the state on assumption of office, Fayemi also visited the Minister of Agriculture and Rural Development, Chief Audu Ogbeh, to equally seek cooperation of his ministry in improving agricultural productivity and employment (especially among the youth) and building on YCAD initiative from his time in office.

The visit also focused on efforts aimed at improving the processing units across the value chains of crop export produce in Ekiti state including cocoa, coffee, cassava, rubber, cashew, and yam amongst others.

The Governor-elect canvassed for improved storage facilities for farm produce to encourage large-scale production as a way of encouraging agro investments in the State of which Fayemi had reportedly received positive response.

While Fayemi was busy seeking collaborations with developmental partners to transform the state, Fayose’s had a different plan with the latest reported purchase of a N76 million 2018 model Lexus 570 Sport Utility Vehicle (SUV) for himself.

Similarly, Fayose also awarded himself and his Deputy, Olusola a whopping sum of N43million as severance allowance upfront, even when he could not pay the civil servants, pensioners salaries, emoluments and entitlement of about eight months owed them.

The plans and programmes of the two major actors at the centre of transition, Fayose and Fayemi are differentiated based on various perception of the people of Ekiti who are the major beneficiary of their actions either negatively or positively.