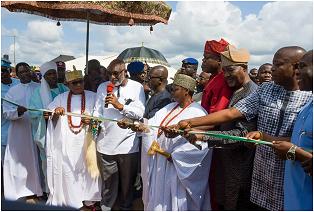 The Deji of Akure, Oba Aladetoyinbo Aladelusi, yesterday showered encomium on Governor Oluwarotimi Akeredolu at the flag-off of the upgrading and dualisation of Oda-road.

He said the people of Akure, the state capital, are happy with him over the various developmental projects in the town.

The monarch said Akure people were particularly grateful to Governor Akeredolu for changing the face of the town with the massive road construction projects, some of which have been completed and others ongoing in the state capital.

Oba Aladelusi spoke yesterday at the flag-off ceremony of the upgrading of Akure-Oda Road to a dual carriageway.

He said Akeredolu government has touched all nooks and crannies of the state in his various developmental projects, adding that the ancient town would always support the governor.

Commenting the Governor for the prudent management of the state’s resources, the monarch said the unprecedented massive infrastructural development in the state had earned the governor a new name among the people known as “Mr. Road”.

He asked the Governor to disregard rumour mongers who were spreading lies that he didn’t like him and his administration.

The Deji of Akure said with the numerous achievements of the governor in Akure metropolis alone, no Akure person had any excuse, but to like the governor.

He said: “Some people are insinuating that I don’t like Governor Akeredolu. If the governor is doing all these projects in my town and I am not happy with him, God may be angry with me. All Akure indigenes are happy with him.

Speaking at the event, Governor Akeredolu appreciated the monarch for recognizing the efforts of his administration in the state, particularly in Akure.

Akeredolu said he was not bothered by the rumour mongers claiming that there was no love lost between him and the Deji of Akure, adding that no matter what rumour mongers said, the love he had for the monarch and the people of Akure would not reduce.

The governor said he planned to construct the eight kilometre road in order to bring the nasty experience the people faced daily on the facility to a thing of the past.

He said: “As a responsive and responsible administration, with the conception, berth and the impending delivery of a qualitative project like this, we are delivering a new asset, a new lifestyle, a new era of property appreciation and, of course, we are bequeathing an enduring legacy to our incoming generation.”

Akeredolu said the eight kilometre dual carriageway would serve as a precursor to an unending positive multiplier effects on the economy and life of the people.

When completed, the project, according to the governor, would lead to decrease in travel time, increase in the lifespan of vehicles, increased interconnectivity with other roads such as the Oba Osupa-Hospital-Ijoka Road via Ijigba Road.