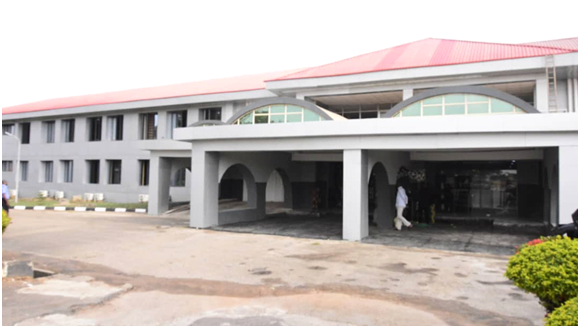 The Governor who was represented by his Deputy, Mr Lucky Ayedatiwa who led other cabinet members and political office holders to the commissioning affirmed that the befitting parliament building was a deliberate efforts of the present administration to provide a condusive legislative complex for the lawmakers.

According to the Governor, the turnaround of the complex is in fulfillment of a promise made to give it a facelift, as the complex now equally house state- of -the- art equipments to enhance legislative duties in tandem with global standard.

The Governor thanked the legislative arm for the cooperation and support through smooth passage of bills sent to the House.

While saying that in a modern democracy, good governance for the betterment of the society is sacrosanct, he assured that his government will always attend to the yearnings and aspiration of the people with a strong courage.

The Speaker of the House, Bamidele Oleyelogun expressed delight atn the epoch -making occasion, saying “history has repeated itself again as over three decades ago, an Owo man who was the Governor of the State, late Chief Adekunle Ajasin erected  the edifice, but after several years, the building due to lack of maintenance dilapidated and another Owo man, Arakunrin Akeredolu deemed it essential to renovate it to a befitting standard.”

While recalling that several months ago, the Governor came to inspect the then dilapidated hallowed chamber which was in shambles and promised that it would be renovated and a temporary chamber was constructed where plenary were holding and several bills passed into law.

The Speaker thanked the Governor and assured him of irrevocable commitment to the programmes and policies of the present administration for the betterment of the people of the State.

In their goodwill messages, the former Speaker of the House, 4th Assembly, Ayo Agbomuserin who spoke on behalf of other former Speakers and lawmakers extolled the leadership qualities of Governor Akereduolu, while giving kudos to the Governor for the project, the Chairman, Ondo State House of Assembly Service Commission, Dare Eniola said the renovation was massive because the edifice was built long time ago.

The Commissioner for Lands and Infrastructure, Ramiu Aminu, said the Governor will not rest on his oars in providing infrastructural projects that will stand the test of time.