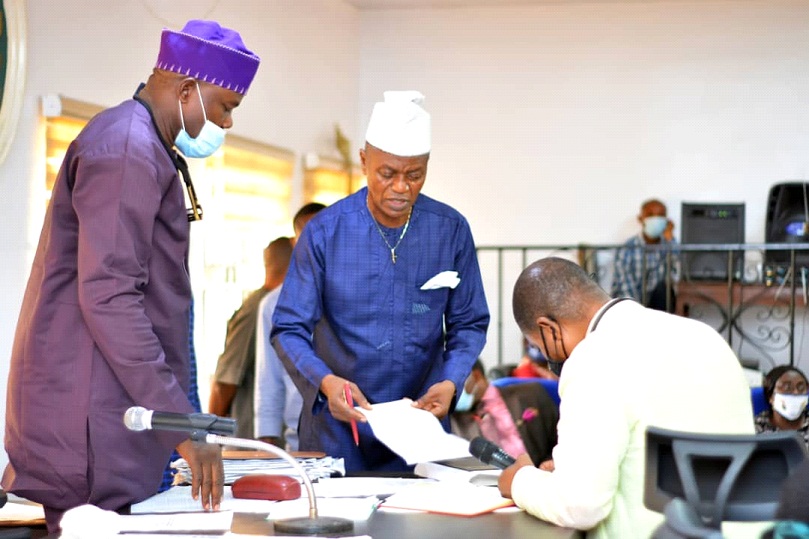 The Deputy Speaker of the Ondo State House of Assembly, representing Odigbo constituency 1, Mr Ogundeji Iroju has been impeached.
Rev. Aderoboye Samuel representing Odigbo Constituency 2 has been elected in his stead.
The former Deputy Speaker, Iroju Ogundeji was accused of gross misconduct inimical to the progress of the House.
The resolution which was signed by 20 members of the House was confirmed to be in line with the ‘Standing Order’ of the House, hence was adopted at plenary.
Aderoboye with his election becomes a two-time deputy speaker. He was first elected between 2000 and 2003.
In his acceptance speech, Aderoboye pledged to work with other stakeholders in ensuring the delivery of democracy dividends to the people.
Also, Oluwole Ogunmolasuyi, representing Owo Constituency 1 was appointed Majority leader, Akingbaso Festus, representing Idanre State Constituency, Minority Leader and a member representing Akoko North West 2,Taofeeq Mohammed the new Chief Whip of the House.
A panel to investigate allegation of gross misconduct against the former Deputy Speaker was inaugurated by the assembly.
It has Mr. Abayomi Akinruntan, a member representing Ilaje 1 as Chairman.
In another development, the name of a Commissioner nominee, Sir Charles Titiloye has been forwarded to The House.
Titiloye will appear before the Selection Committee of the House tomorrow at 10am.
Reacting to his impeachment, the former Deputy Speaker, Iroju Ogundeji has declared his impeachment as illegal.
Iroju who spoke with The Hope posited that he remains the Deputy Speaker of the house as his purported impeachment is unconstitutional.
“The guidelines for the election and removal of the Speaker and the Deputy Speaker is very clear, it must meet up with the two/third of majority members resolution with a vote at the plenary. This must be 18 out of 26 members in which nine of us are still together. The impeachment can not hold, you will see our rejoinder”, he noted.