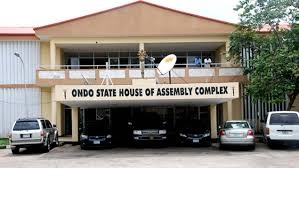 By Josephine Oguntoyinbo
|
Ondo State House of Assembly has passed into law the 2020 appropriation bill with a total balance projection of N187,858, 525,273 naira on both recurrent and capital Expenditure.

Upon submission and consideration of the report, the chairman, house committee on finance and appropriation, Mr Sunday Olajide noted that the budget projection was increased by N9,914,690,000 as against the initial proposal of N177 , 943, 835 , 273 .

After critically examining the 2020 appropriation bill defended by all Ministries, Department and Agencies MDAs in the state, the house met to see to the passage of the 2020 budget estimate for the overall development of Ondo state.

Olajide, in the recommendation therefore enjoined the state govt to take all necessary steps that will propel all income generating MDAs to embark on more result oriented internally generated revenue drive in line with extant laws.

Oleyelogun noted that the 2020 fiscal budget will further drive the growth of the economy and commencement of new projects and programmes that are crucial to the development of Ondo state.

The speaker who commended Governor Oluwarotimi Akeredolu for his efforts at transforming the state assured that both the executive and the legislative arms of government will continue to work in harmony in the best interest of the state,  just as he wished the people of Ondo state a fruitful and prosperous year 2020.