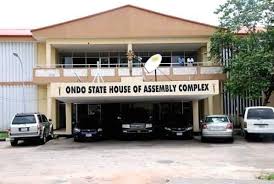 By Josephine Oguntoyinbo
|
Ondo State House of Assembly has said it would enact an enabling law that will fast-track strict adherence to bill boards and advertisement regulations and management in the state.

The Chairman, House Committee on Physical Planning and Urban Development, Mr Festus Akingbaso gave the assurance when he led the committee’s members on a familiarisation visit to Ondo State Signage and Advertisement Agency (OSSAA) in Akure.

The visit of the House Committee to the agency was part of the ongoing familiarisation to Ministry/ Department Agencies (MDAs) aimed at knowing their modes of operations, prevalent challenges and possible areas of collaboration for optimal performance.

The committee chairman, who spoke through Mr Tomide Akinrogunde assured the agency of the lawmakers unwavering commitment to the formulation and implementation of enabling laws that will reposition it for greater performance.

While promising the hallowed chambers support for the agency in the discharge of its assigned duties, the lawmaker said repositioning and restructuring of its operation will promote efficiency and equally boost revenue generating capacity.

In his response, the Senior Special Assistant to Governor on signage and advertisement, Mr. Akinwande Akinrodoye said both management and workers at the agency are dedicated to managing and regulating all forms of outdoor advertisement in the state.

He however called for a review of the law guiding its operations with a view to boosting Internally Generated Revenue of the state.

He also expressed the readiness of the agency to cooperate with the ninth assembly in building a more robust synergy with both local and multinational companies doing business in the state so that advertisement will be of huge benefit to government and the people.