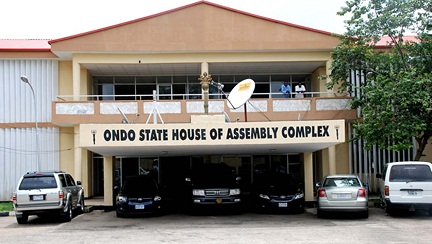 By Josephine Oguntoyinbo
|
Ondo State House of Assembly has assured that it will complement the state government efforts in improving the Internally Generated Revenue (IGR) of the state.

He said this is achievable if all loopholes are blocked.

He assured that the 9th assembly will represent the people of the state well by doing everything within its capacity to make impact.

The chairman who affirmed that all reports will be worked upon sought for their cooperation to achieve the desired outcome.

The chairman called for training for committee’s member so as to be more informed about the work.

“This is the beginning of our interaction, we will work with you and put every machinery in motion for effective service delivery. We will also look into your requests and see to their full imple-mentation. The job has started, and I can assure you that we will leave the office better than we met it,” he stated.

Also speaking, one of the committee’s members, Mr Sunday Olajide commended their level of competencies and the ways they have been relating with the assembly, saying they have enjoyed good working relationship with them.

He stressed the need for a robust working relationship, saying the committee’s raw material is their finished product.”To ensure good governance and reduce fraud to the barest minimum, we must work as a team. And we will always make your job seemless anytime you call our attention to it”.

Another member, Rev. Samuel Aderoboye, said they rely on the agencies efficiency to be able to deliver promptly.

Earlier, the State Auditor General, Sunday Adegoke, took time to explain to the committee how the office operates across the state and promised to give maximum support to the legislators to enhance effective performance.

He averred that the office has been enjoying robust support and cooperation of the office of Public Account Committee and would like to see this continue in the new dispensation.

He however called for the full imple-mentation of the Audit law which has been passed into law.

Also, the Auditor General for local government, Mr Francis Adaramola commended the committee for the visit, adding that they will cooperate with them and provide every information needed to make them run the office effectively.