ODHA signs bill to rename OSUSTECH after Agagu into law 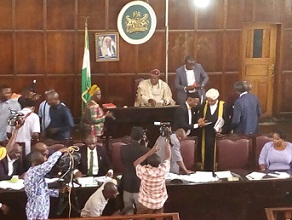 ODHA signs bill to rename OSUSTECH after Agagu into law

It would be recalled that at a plenary sitting on 3rd October, 2019, the Ondo State House of Assembly considered the principle of the bill for the law to be amended and thereafter committed it to the house committee on Tertiary institutions for thorough scrutiny.

While submitting the report of the committee at a plenary presided over by the Speaker of the assembly, Mr Bamidele Oleyelogun, the Chairman of the committee, Felemugudu Bankole, said that the bill has been properly examined after series of meetings, and consultation with the people of the host community.

Felemugudu affirmed that all stakeholders supported the idea of changing the name of the institution, adding that OAUSTECH is the acronym that people supported.

Reading the recommendation of the committee, the Chairman noted that all ammendments contained in the bill were adopted by the committee after critical analysis and consideration.

The committee recommended that the law be cited as the Olusegun Agagu University of Science and Technology, Okitipupa (OAUSTECH) law, 2019.

The Majority Leader of the house, Jamiu Maito therefore moved a motion that the bill be passed into law which was seconded by a lawmaker representing Ondo West state constituency 1,Tomide Akinribido.

Consequently during the plenary, the house has passed the amendment of the law for the Ondo state education endowment fund.

Submitting the report of the committee, its Chairman, Toluwani Borokini posited that members held series of meetings and addressed all issues in the bill.

Reading the recommendation of the committee, he said that a sum of one thousand naira education fund payable by every adult in the state annually, which sum is subjected to periodic review for the purpose of rebuilding, revamping, general upgrading and repositioning of education in the state.

The report recommended capacity building for Education Officers and Teachers and that signatories to the education fund shall be three in number; the Permanent Secretary, Ministry of Education, Science and Technology, Secretary to the Board and the Accountant of the Education Endowment Fund, among other recommendations.

The Majority leader of the house, Jamiu Maito moved the motion for the bill to be passed into law, it was seconded by a lawmaker representing Okitipupa state constituency I, Akinrogunde Akintomide.

After unanimous decision of the house that the bills be passed into law, the Speaker of the house, Oleyelogun commended the committees for a job well done and ruled that the amended bills become laws.