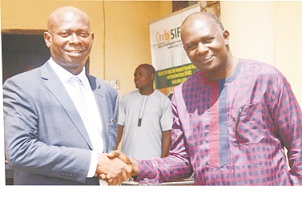 By Fatimah Muraina
|
Ondo state Internal Revenue Service (ODIRS) has said that it will focus more on training of staff to ensure that they generate revenue for the state.

The Organisation has also denied the rumour on the collection and submission of CV’s of unemployed graduates for employment as being posted by Unscrupulous individuals on the social media .

The Chairman of the  Service, Mr Tolu Adegbie made this known while addressing staffs during the 2020 new year praises held in Akure.

Adegbie promised them of an improved Welfare in training saying that the organisation will organise more trainings and will encourage certification.

He stated that all the staff will apply for certain exams including all mandatory professional programmes which he said will equip them for the work ahead.

Two outstanding staffs, the Head of Relationship Management Unit Mr Kuye Gabriel and Head of Contact Center of the organisation Miss Aderonke Williams were recognised and presented a sum of N250,000 each for their outstanding performances for 2019 year .

Adegbie said Mr Gabriel was selected for making the sum of N9 bn collection  by the organisation which he said was more than what a whole tax station generated while Miss Williams who was responsible for the recruitment exercise was recognised for making an history that the exercise was done without any form of criticism or whatsoever.

Reacting on the development, Miss Aderonke Williams spoke appreciated the Chairman saying it was a big surprise which she never expected .

She described the recognisation as a way of encouraging them to do more as she called on other staffs to work harder to achieve the mission and vision of the organisation.

” The recognition is like encouraging all the staffers and teaching us not to relient even when you feel you are not seen but to continue to put in your best because it will speak for you”, she said.