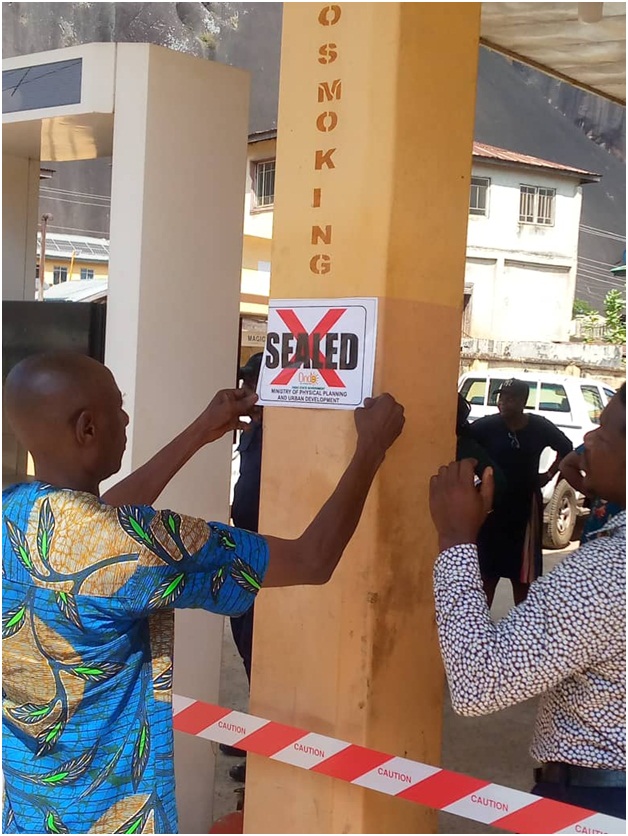 Worried about the indiscriminate siting of gas, filling stations and illegal residential buildings across Ondo State, the Government has commenced the sealing of illegal structures.

The government also reaffirmed its determination to prosecute owners of such buildings without proper approval and documents.

To this end, the state Ministry of Physical Planning and Urban Development has sealed off four gas stations in Akure and four petrol stations in Idanre, over lack of building permits and other necessary documents.

The Commissioner of Physical and Urban Planning, Alhaji Amidu Takuro, who led the team, said data available to the Ministry revealed that there was increasing number of indiscriminate construction of buildings, petrol and gas stations in the state.

He said the seal off was done with a view to enforcing rules and regulations guiding building of structures for proper planning and development of major towns and cities in the State.

According to him, the illegal structures lacked the mandatory land use clearance, building permit, survey plan and Certificate of Occupancy, which often cause incessant building collapse  and fire outbreak with human and material casualties.

Takuro, who noted that the exercise would cut across all the 18 Local Government areas of the State, called on residents intending to put up  structures in any part of the state to obtain necessary documents from the Ministry before embarking on such projects in order to avoid fine, prosecution or demolition.

He added that any individual or organization who evades payment of processing fees to obtain the necessary permit or approval on their structure has committed criminal offence and defrauded the State government of its internally generated revenue.

The Commissioner warned against any attempt to break the seal placed on sealed stations, stressing that such action would amount to violation of government order which will attract arrest and prosecution.