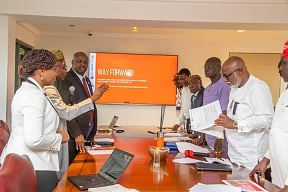 By Bukola Olamona
|
Ondo State government has commenced local production of science materials, in order to provide modern science equipment for school in the state.

The state commissioner for Education Science and Technology, Mr Femi Agagu who visited the workshop of Ondo State Science Equipment Centre in Akure where the equipment were being produced,  expressed satisfaction with the materials that were produced and ready for distribution.

He commended the Staff of the Centre who are  from the science department of the state Ministry of Education Science and Technology,  saying the government, investment in the centre was not a waste considering their achievements.

Also speaking at the skill acquisition Center where school cardigan, socks, muffler etc are being produced, the Commissioner said the government would strive to make the centres an internally generated revenue source for the state.

He charged youths in the state to take advantages of the Centres to learn skills that would not only make them self reliance but employers of labour in future.

In her speech, the Director, Ondo State Science Equipment Centre Dr (Mrs) Oluwatoun Akinkuolie thanked Governor  Akeredolu and the Commissioner for Education Science and Technology for the financial encouragement the Centre received from state government.

She said the products from the centre were of best qualities compared to imported ones noting that the cost of producing it locally was cheaper than the cost of importation.