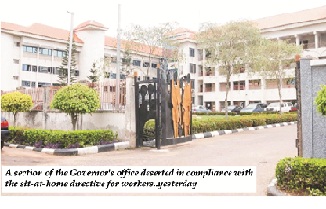 Ondo state government has ordered a seven- day closure of all markets in the state.

Governor Akeredolu also directed the immediate cancellation of all his official engagements. This directive includes courtesy calls and other engagements already approved and shall suffice for a period of 14 days in the first instance.

A statement issued by Commissioner for Information and Orientation, Mr. Donald Ojogo  ordered the immediate closure of all markets, malls and shops across the State.

Under this fresh directive, only the sale of life-saving and sustaining items like food, water and medicals shall be allowed.

The statement also disclosed the continued suspension of political gatherings and meetings that  are still in force.” In this regard, any form of open campaign for the forthcoming Local Government Election in the State should be discontinued for the meantime,” the statement said.

Meanwhile, another two new cases of coronavirus have were yesterday recorded bringing a total number of persons infected in the country to 44.

A tweet from the Nigeria Centre for Disease Control, NCDC, revealed that the cases have traveled to Germany and United Kingdom. Two out of the cases have been discharged with one death recorded.