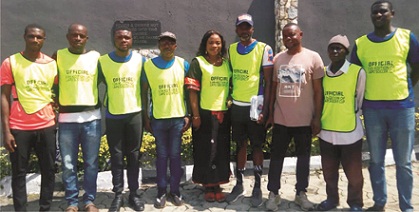 By Femi Atolagbe & Balogun Johnson
|
Ondo State Commissioner for Youth and Sports Development, Mr Dotun Owanikin has reiterated the readiness of the present administration to partner with  interested corporate and individual organisations to develop grassroots sports in the state.

Owanikin, who was represented by the Director of Sports in the Ministry, Mrs Evelyn Lebi stated this at the seminar and symposium organised for participating  Club’s owners and coaches.

Ahead of the 11th Edition of  Ijapo Kunle Tuface Football Promotion tagged (Barrister Dotun Owanikin 2019 Competition) kicking off on Sunday December 1, this year.

With the theme: ‘Grassroot Football Development, the way forward 2020.’

The commissioner commended the organizers for their innovation, consistency and the great job they are doing in the state to ensure the youth are engaged to dissuade them from any social vices.

According to him, all round sports is the best form of youth empowerment, this he said was part of the present government agenda in which we will pursue till the state takes its rightful place in sports development among the comity of states.

He charged  the organizers to be more proactive by moving closer to the ministry, saying the ministry is ready to partner and support their organisation to further develop grassroots football in the state.

The Guest Speaker, Ex- International, Akin Olowokere who spoke on  Grassroot Football Development the way forward 2020, urged the upcoming stars to have passion for the game, saying passion ignites fire.

He added that talent alone would never take them anywhere, he therefore urged them to have confidence in themselves and believe in their ability and make use of (3D) Discipline, Dedication and Determination, as their guide at all time.

His words , football is a terminal game, so it’s important to discover talents early, nursery them in order to complete their circle .

‘Our grassroot development is not strong, we are not doing enough in that regards,he therefore appealed to government at all level to play their role well, in order to harness the talents abound  from  the scratch.’

The proprietor of Ijapo Kunle Tuface Football  Promotion, Nigeria , Mr Ayokunle Oluwatope said the seminar and the symposium was organised to brain storm on how they can address and improve on the inadequate areas discovered during the previous editions.

He revealed that the purpose of the competition was to discover talents from the grassroots and for the government to see reasons to believe in their own, saying the competition had produced many talents like Uzube Nnazemba, Seun Olulayo, Kehinde Adedipe and many others who are still doing excellently well in their various careers.

While reading the rules of the competition to the participating teams as attached to their forms, he assured them of an improved 11th edition.

He said the winner and first runner up of the competition will coast home with N50’000 ,N30,000 and Kehinde Adedipe branded jersey respectively.

Club’s representatives, urged the organizers to improve in term of officiating and security.

Meanwhile the Vice Chairman of Ondo State Referee Association,  Mr Femi Akinribido has assured the organizers and the participating teams of unbiased officiating .

The participating teams are Group A