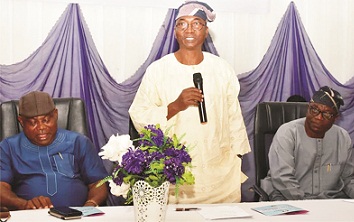 By Bukola Olamona
|
The Ondo State Government has restated its commitment to improving the standard of tertiary education through adequate funding and prompt release of subventions.

This was contained in a goodwill message by the Governor, Arakunrin Oluwarotimi Akeredolu, SAN, to the 37th National Executive Council Meeting of the Senior Staff Association of Nigerian Universities (SSANU) taking place at Adekunle Ajasin University, Akungba Akoko.

In the message, the Governor said his administration has expended huge resources to upgrade the facilities at all the higher institutions in the state. “It is to the credit of this government that all the Universities are now wearing a new look and they now receive their monthly subventions promptly despite the lean financial purse of the state and the general economic downturn in the country.

“It is worthwhile informing you that almost all the courses being offered in our institutions have been accredited by the Nigerian Universities Commission.”

The Governor added that the policies and decisions taken concerning the higher institutions are not just instantaneous and sudden but are well thought out as most of them emanated from the recommendations of the education summit organised by the government.

He assured the gathering that his government remain resolute in the quest to improve the standard of education in the state.

The Governor called on the association to imbibe ethics that will ensure industrial harmony rather than activities that are capable of breeding industrial chaos.

“As a matter of fact, you should avoid incessant strike action that could draw our educational institutions backward.

“Your association must always play a supportive role to government as partners in progress knowing full well that the growth of of our universities is hinged on the level of cordiality displayed by you while pressing for your demands.

“Unionism should be a means of fostering peace and stability in our institutions. The use of strike should be discouraged as much as possible.”

The 37th NEC Meeting of SSANU started on Wednesday with delegates from over 100 institutions in attendance. The meeting is chaired by the National President, Com. Chijioke Ugwoke and the National Vice President (West), Com. Ilesanmi Jimoh.

Meanwhile, an Award ceremony for deserving members of the University Community and beyond was held earlier on Tuesday. Those honoured include the Vice Chancellor, Prof. Ajibefun for what the AAUA Branch Chairman of SSANU, Com. Temitope Famuti called “his commitment to the welfare of staff and for being union friendly.”

Others were: the Pro Chancellor and Chairman of Council, Dr. Tunji Abayomi “for his courage in defending policies that will move the University forward;” a former Bursar, Mr Olayiwola Akinterinwa “for probity and accountability;” and Hon. Kolawole Babatunde (Amechi) for his contribution to the poor and needy in the society.

Also honoured were the pioneer Chairman of SSANU in AAUA, Com. Samuel Akinduro, a former Pro Chancellor, Sen. Bode Olajumoke “for being a good friend of the physically challenged and for building a twin hostel for them on campus.