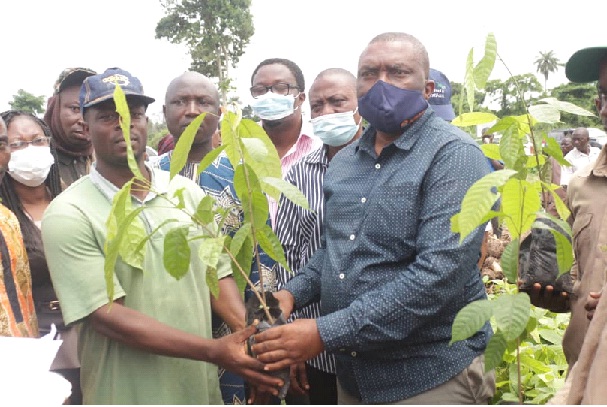 No fewer than 1000 cocoa farmers have benefitted from cocoa seedlings distribution programme of the Ondo state government.
This gesture is coming under the agricultural revolution of the Akeredolu administration as the state accounts for about 70% of cocoa production in Nigeria, in order to restore the glory of the state in massive cocoa production.
Governor Oluwarotimi Akeredolu initiated cocoa plantation rebirth with the distribution of eight hundred thousand seedlings to farmers in the state and another provision of a model cocoa farm of about eight thousand four hundred hecters of land in the Jugbere community in Owo local government area of the state.
Senior Special Assistant to the governor on Agriculture and Agric Business, Pastor Akin Olotu lauded the government innovation.
He stressed that the distribution of the seedlings and agrochemicals would enhance the production of cocoa in the state.
While accessing the model farm lands, Akin-Olotu commended the farmers.
Administrative Secretary, Cocoa Revolution Project, Mr Toba Adenowuro encouraged farmers to reciprocate government gesture.
The representative of Central Bank of Nigeria Akure Branch, Mr Temitope Akintunde advised farmers to be proactive in their farming methods.
Earlier, the State Cocoa Revolution team in conjunction with private partners had organized three-day Train the Trainers workshop themed “COCOA GREENER ACRES INITIATIVE FOR SUSTAINABLE PRODUCTION aimed at keying into the dream of the state government to reposition her leadership position in Nigeria cocoa production.