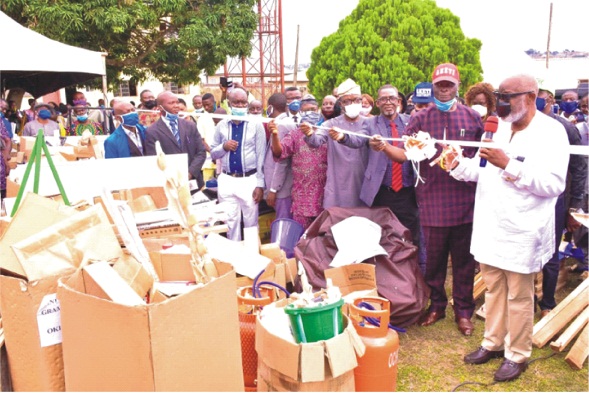 Ondo state Governor, Oluwarotimi Akeredolu, yesterday commissioned and distributed N90 million worth of science laboratory equipment and Mathematics training kits to 40 selected public secondary schools across the state.
The equipment was procured to improve science and technology education in the state public schools.
At the event held at Community Education Resource Centre, Ayedun, Akure, Governor also distributed technical equipment produced by Ondo State Science Equipment Centre (OSSECA), Akure, to the benefitting public secondary schools.
Speaking at the event, Akeredolu said his administration would continue to harness science and technology for social and economic development of the state.
The Governor, who emphasised the critical role science and technology play in industrialisation and sustainable economic development of a nation, said his administration would continue to show keen interest in improving the teaching and learning methodologies of Sciences, Technology and Mathematics in schools.
He further revealed that his administration has equally released fund for production and fabrication of Science and Technology equipment for distribution to 60 schools in the state.
“Let me inform you that this administration from inception has determined to provide functional education and technological growth that will take Ondo state to the forefront in the world of Science and Technology which all its citizens will always be proud of.
“Hence, my administration will leave no stone unturned in ensuring the Scientific and Technological advancement of the state”, he stressed.
Governor Akeredolu promised that his administration would continue to recruit more personnel into the public schools and encourage teachers through prompt promotion and improved welfare packages.
He revealed that since his government came on board, it has renovated not less than 600 primary schools and built over 400 new ones with modern facilities across the 18 local government areas of the state.
The Governor disclosed that in the next phase of school renovation, attention would be shifted to improvement of secondary schools with a view to further ensuring conducive environment for learning and teaching.
While charging principals and teachers of schools benefitting from the government gesture to put the equipment into good use for the quality assurance and optimum performance, the Governor equally advised students to reciprocate the good gestures and support being provided by his administration by studying very hard and ensure excellent performances in their academics and as well win Laurels for the state.
Governor Akeredolu also noted that his administration’s commitment to bitumen exploitation and actualisation of the Deep Seaport called Port Ondo, to transform the state socially and economically was total, stressing that by the time all the government lofty plans are fully achieved Ondo state would be made forever.
The event was attended by the Chief of Staff to the Governor, Chief Olugbenga Ale, Head of Service, Dare Aragbaiye, PS, Ministry of Education, Science and Technology, Rev Akin Asaniyan, school managers and representatives of selected schools.
Also, the Commissioner for Education, Science and Technology, Femi Agagu represented by the Special Adviser to the Governor on Education, Dr. Olawumi Ilawole, commended the Governor for his sustained efforts to transform education sector, adding that the distribution of the equipment is another laudable step by the present administration towards improving the quality of teaching and learning of Science, Technology and Mathematics Education in the state.