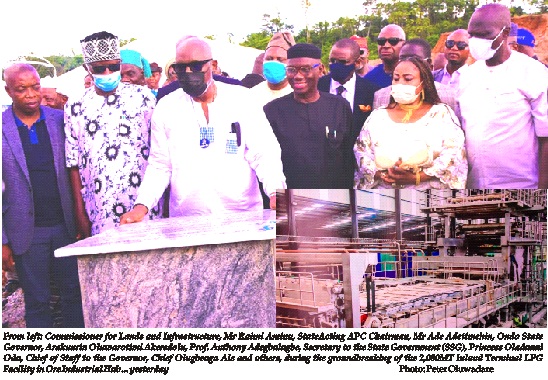 Ondo state Governor, Oluwarotimi Akeredolu, yesterday called for the immediate diversification of Nigeria’s economy to meet the present day reality.
The Governor stated that if the country must have a secured future, it must diversify its monolithic oil revenue resources which can no longer be relied upon because of its dwindling market price.
Akeredolu made this known while performing the groundbreaking of the 2, 000MT Inland Terminal (LPG Facility) and the launch of the Red Gold Project (Ondo State Oil Palm Development Initiative) at Ore Industrial Park, as part of activities to mark the first 100 days of his second term in office.
The project is expected to catapult the state as the nation’s LPG distribution nerve centre. The governor said the dwindling economy of the country predicated upon the monolithic nature of its earnings has made diversification inevitable.
The Governor disclosed that the value of the investment which is in partnership with a private firm, Alles Charis, is over N5.5 billion with over 300 jobs to be created immediately.
By the time the first phase of the project will be completed within the last quarter of 2021, over 2000Metric Tonnes of LPG will be produced by the first privately owned Inland Terminal LPG Storage Facility in the country.
Akeredolu who expressed delight over the development described the Ore Industrial Hub as an important Hub connecting the South – West and South – East, South – South and one of the important gateways to Northern Nigeria.
While calling on all other credible investors to come over to do business in the Sunshine State, Governor Akeredolu said the three industrial hubs established by his administration will turn around the economy of the state.
On Red Gold Project of the state designed to revolutionise the Oil Palm sector, the governor highlighted the various value chains of Oil Palm to include both consumption and industrial uses.
“Dwindling and erratic market of crude oil globally has made it imperative for Nigeria as a nation to diversify our revenue sources. We have over-relied for too long on fossil fuel revenue; A monolithic economy. The need to diversify the economy is imperative for any hope of a future for our country.
When I was voted into power in 2017, I received the mandate to run the affairs of the State with much joy and concern. Concerns, in terms of how to transform the State from the level I met it to an enviable height of sustainable economic growth.
“The strategic plan of the State Government has been to create an enabling environment for the industrial and infrastructural development through collaboration with credible investors from the private sector. This effort culminated into the development of Ore Industrial Park in partnership with Hessmac Industry Limited, and other privately established industrial parks like, Linyi Industrial Hub and the upcoming Minco Allied Industry Limited’s Modern Industrial Park”.
“It would be amiss if I failed to address what is the most important sector of the Ondo State Economy; agriculture which is dominated by our tree crops. We have made the oil-palm value chain of the uppermost focus, in the agricultural sector”.
“This administration’s strategic plan to revolutionize all oil palm plantations within the State since its inception, has been with an annual target of 320,000MT of oil palm produce and to enlarge and increase the existing four major players in the oil palm industry namely; Okitipupa Oil Palm Company Plc, Ore Irele Oil Palm Limited, Ayesan-Araromi Oil Palm and Bambi Farms Limited through provision of land and other political support”.
“We conceived the concept of having a brand-new Oil Palm City that will cover about one hundred thousand (100,000) hectares of land, not necessarily contiguous but not far apart and today, we have three major players namely JB Farms Limited, Tropical Palm Limited and Sudit and Chemical Oils Limited, allocated a total land mass of 25,000 hectares to be developed into Oil Palm Plantations within the State”.
“In total, we have given out approximately 60,000 hectares to reputable organizations for Oil-Palm cultivation including ACME, SAO Capital, TerreNovo Agro, ABBIS farms, Agboola Green Estate and other Palm oil entrepreneurs of various sizes of land ranging from 100 to 1,000 hectares”.
“For the proposed establishment of 2000MT Inland Terminal Project, within Ore Industrial Park, Alles Charis Gas has strategically chosen the Ore Industrial Park for the installation one of the privately owned and functional LPG inland Terminal in Nigeria. Ore is an important hub connecting South – West and South – East, South – South and one of the important gateways to Northern Nigeria”.
“The equipment for the first phase construction, I am told has been purchased and delivered in the country. Alles Charis Gas is expected to complete the first phase installation by the last Quarter of 2021 for its initial operation.
“This administration between 2017 and now, brought in Linyi Industrial Hub with over 7 companies that are operational and 3 new ones in view; the upcoming Minco Allied industry Limited – Modern Industrial Park is undergoing construction now and our collaboration with Hessmac Industry Limited on Ore Industrial Park attracting several companies coming up most importantly Alles Charis Gas Limited’s 2000MT Inland Terminal Project, which is being flagged-off today”.
“Let me acknowledge the efforts and interest of the management of Alles Charis Gas Limited for joining this administration in making the private sector more visible in Ondo State. I also want to use this opportunity to make a clarion call to would-be investors, that Ondo State is the haven for industrial development, Nigeria’s Hub of Investment opportunities”, Akeredolu added.