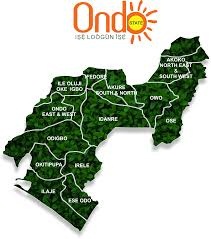 Ondo State Government has warned the citizens to adhere to what is stated in their building approvals, saying that it would not condone any illegal construction across the state.
The State Commissioner for Physical Planning and Urban Development, Alhaji Rasheed Badmus, who stated this while leading top government officials and some Staff of the ministry on inspection of a site at Alagbaka, Akure, the state capital, maintained that it is against the extant laws of the state.
According to a statement by the Information Manager of the ministry, Mrs Adebimpe Amos,a copy of which was made available to The Hope, the commissioner expressed worries that such illegality could endanger lives and properties of the citizens.
While condemning the act of building what is different from what the government approved, the commissioner warned that such people would henceforth face the wrath of law.
“It is not in order to construct a petrol station where you got approval for an hotel, even within residential areas. It is indeed wrong. The state government would not tolerate such illegality and lawlessness.It contravene the extant laws of Physical Planning,” he posited.
Badmus expressed displeasure over a building, Iyeomo on a portion of land belonging to Showboy Integrated Limited.
The Commissioner who ordered the owner to remove immediately, explained that the Architectural design contained a proposed five storey building hotel, but has now been converted to a petrol station.
“The owner got an approval from the ministry for the construction of an hotel. It was the concerned citizens in the area that alerted the government that it has been converted to a petrol station, contrary to the initial approval. “Though, the owner took advantage of unconventional hours to bury underground petrol tanks, which was an indication that he has an ulterior motive to deviate from the initial approval given to him by the state government.
” After the detection of the illegal laying of tanks and pipes at the site, the ministry subsequently marked the site and an enforcement notice was served on him. But he refused to stop the ongoing project,”’,he stated .
He therefore directed the immediate removal of the tanks , pipes and other items buried on the site,noting that it was done in contravention of the extant laws of Physical Planning.
Commenting, the Permanent Secretary of the Ministry, Mr. Joshua Folayemi said that it is unconstitutional for anybody to build or construct any building against the Ministry’s initial approval.
“There are rules and regulations for everything in the country, particularly in this state. Once you have gotten approval for an hotel building, you must not do otherwise. There are some areas you cannot build a petrol station, why going contrary. The act is condemnable,” he stressed.
Those on tour to the site with the Commissioner were the Permanent Secretary and Directors of the ministry.