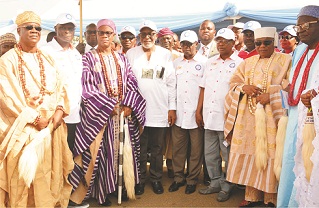 The Ondo state governor Arakunrin Oluwarotimi Akeredolu has expressed hope that the new culture of health insurance would improve all health indices, and subsequently ensure qualitative healthcare delivery in the state.

Akeredolu made this known yesterday during the launch of the Ondo State Contributory Health Scheme (ODCHS), and the flag-off of the Abiyamo Maternal and Child Health Insurance Scheme (AMCHIS), held at the Mother-and-Child hospital, Akure, the Ondo state capital.

The governor explained that in order to complement the Abiyamo scheme, his administration has paid a commitment fee of N100 million, and also fulfilled other criteria for benefitting from the Basic Healthcare Provision Fund (BHCPF)

He described health as a fundamental human right, and a critical indicator of human development, hence the march towards Universal Health Coverage (UHC).

“We are committed to it with a consciousness of a sustainable framework of healthcare financing.

“We are not here today as hypocrites of UHC, but as undaunted practitioners of this paradigm shift in Nigeria’s healthcare discourse,” he said.

Akeredolu also explained that pregnant women and under-5 children were vulnerable people whose physical and physiological states should not deprive them of their rights to qualitative healthcare delivery.

“We are here to justify the healthcare rights of these groups of persons.

“In order to complement the Abiyamo scheme, our administration has paid a commitment fee of N100 million, and also fulfilled other criteria for benefitting from the Basic Healthcare Provision Fund (BHCPF).

“Very soon, the secondary facilities in all 18 LGAs shall serve as referral centers for the 203 Primary Healthcare facilities (PHC) designated to implement the BHCPF.

“The good people of Ondo State in all communities shall thus easily access maternal and under-5 healthcare services in the 203 PHC facilities and all secondary facilities in no distant time,” he said.

He advised those living in the state but have no residency card to go and get theirs to enable them continue to enjoy and access various government facilities.

According to him, government has structured the Abiyamo Maternal and Child Health Insurance Scheme (AMCHIS) as one of the products developed and managed by the state Contributory Health Commission (ODCHC).

However, he enjoined pregnant women who are residents of the state to obtain the residency card(Kaadi Igbeayo) in order to qualify for the scheme and added that their under five children must their immunisation up to date and attend well child clinic once in six months to revalidate their registration on the scheme.

Earlier, Dr Abiodun Oyeneyin, General Manager, Ondo State Contributory Health Commission (ODCHC), said the launch of both schemes would not only lead to massive reduction in maternal and infant mortality but also bring about economic empowerment of the people and economic growth of the state in general,” he said.