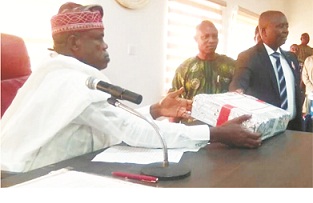 By Josephine Oguntoyinbo & Adekola Afolabi
|
The Ondo State Budget 2020 was yesterday presented before the State House of Assembly for scrutininy and approval.

The budget proposal tagged, “Budget of Growth” was presented to the House of Assembly yesterday.

Receiving the budget, the Speaker of the Assembly, Rt. Hon. Bamidele Oleyelogun applauded the governor for giving priority attention to all sectors, saying this would ensure all-round growth and development of the state.

He assured that the Assembly would do the needful before the proposed budget estimates is passed into law.

Meanwhile, the 2020 budget proposal has since been committed to the House Committee on Finance and Appropriations for proper scrutiny and speedy passage.

This was sequel to the motion moved by the House Majority Leader, Jamiu Maito and seconded by Akinribido Tomide, after exhaustive deliberation and contributions by other lawmakers on the floor of the House.

Maito, on behalf of the Assembly, appreciated Governor Akeredolu for making the budget available before the end of the year, saying the development would further ensure speedy passage for the development and progress of the state.

The lawmakers also used the occasion to draw the attention of the governor to the dilapidated state of the Assembly hallowed chamber, called on him for its urgent renovation so that they can continue to perform their legislative functions in a conducive environment.

Speaking with journalists shortly after the budget presentation, the Commissioner for Economic Planning and Budget, Emmanuel Igbasan, disclosed that the budget is a realistic one.

He affirmed that up to November 31 this year, budget performance is at 64.29 percent, which is the highest ever in the state.

He noted that this year’s Budget of growth is geared towards growing all sectors of the economy with emphasis on human capital development.

“We believe that as an administration, the wealth of the state is not on bitumen, cocoa, or oil but is in our people.

“Therefore, we want to ensure that we enhance the productive capacity of our people through quality learning outcome in education, quality health care delivery, Agriculture where we have comparative advantage, not leaving out the productive sector behind which is also the real sector of the economy.

He, however, explained why there is a reduction in this year’s budget compared to last year’s budget and penultimate year, saying that the government has come to the realisation that the revenue inflows always fall short of expectations.

“We have crafted a realistic budget taking into consideration the expected glot in global oil market price due to excess stock from the USA and China. We have to made our presentation appropriately and we believe that if all hands are on deck, we will realise the budget submitted before the House”, he stressed.

While speaking on the performance of last year budget, he said for the first time, the 2019 budget performed excellently well.