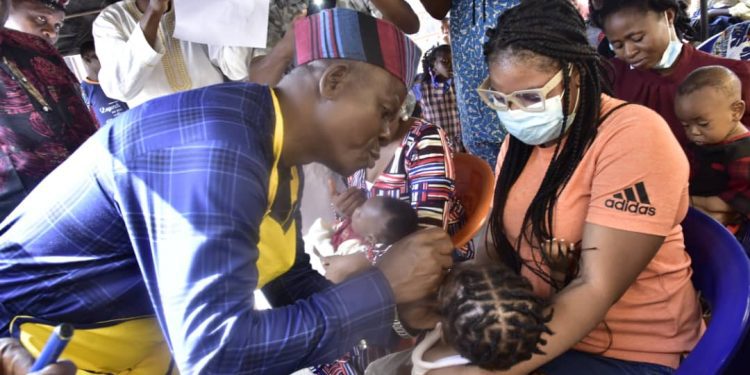 Ondo State Government has reiterated its commitment towards providing immunisation activities to residents especially children for the prevention of diseases, just as it called on caregivers to ensure that children are adequately immunised at the various health facilities across the state.

According to him, the exercise commences tomorrow (Saturday) in the state with a target of over one million children noting that it will be in two parts.

Describing vaccination as the gateway to achieve greatness in children, he called on caregivers and mothers to sensitise others on the need for children’s effective immunisation.

Represented by the Permanent Secretary, Ondo State Primary Health Care Development Agency (OSPHCDA), Dr. Francis Akanbiemu while commending the efforts of developing partners in achieving an improved health sector in the state, he solicited more support for the state.

SA to the Governor on Health, Prof Dayo Faduyile who was represented by Dr. Dolani Gbelela who noted that government has been doing the needful in ensuring safe delivery of pregnant women and also the fulfilment of their children through the provision of Immunisation services, stressed the need for mothers to make their children available for the exercise.

Speaking on behalf of partners, State Coordinator, World Health Organization (WHO), Dr. Dele Davies commended the collaboration of government with partners in ensuring that children are reached with Immunisation services stating that the state government has given priority to Immunisation.

While assuring of more support in ensuring that eligible children are reached for the OBR2, he stressed the importance of immunisation for the benefit of healthy living of children.