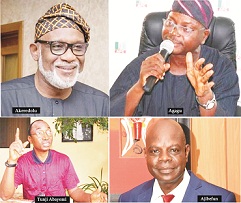 From Jimoh Ahmed, Ikare Akoko
|
Thirty two days to the expiration of the tenure of the incumbent Vice Chancellor of the Adekunke Ajasin University, Akungba Akoko, Professor Amos Igbekele Ajibefun, efforts to appoint a new hand to replace him appeared to be inconclusive.

No fewer than 25 professors have shown interest in becoming the next Vice-Chancellor of the institution when the position was thrown open for those interested through advertisements in both local and national newspapers in the country.

According to investigations by The Hope, ever since application for the post closed at around 4.00 pm on August 9, 2019, everything about the whole process appeared to be shrouded in secrecy.

Sources in the school disclosed that nobody could say exactly what was going on about the race to fill the position.

Sources told The Hope  that despite the closure of the application nobody has been short-listed so far.

However, another  source hinted that the processes were stopped  following a letter from the state government directing the school to put a halt to the processes due to a petition from one of the institution’s  council members alleging some infractions.

The source also disclosed that the pro-chancellor and chairman of council, Dr. Tunji Abayomi was directed through the letter to respond to allegations contained in the petition against him.

It is the norm in the institution for candidates that applied for the position to be screened and those who meet the standard to be shortlisted.

Also,  a source in the school confided in The Hope that the school’s Governing Council met throughout last week to deliberate on the matter, an indication that it was making move to address the situation.

Meanwhile when our reporter approached the Office of the Acting Registrar, Mr Opeoluwa Akinfenwa, he said he was busy while efforts to speak with him on phone was abortive as his two lines were switched off and no reply was given to the text messages sent to him on phone.

Seven out of the 25 professors that applied for the job are currently working in the university.

Others who are in the race but outside the university service include Professor Temiloluwa Ologunorisa (FUTA, Former DVC Osun State University and Professor Kayode Akeredolu (LASU) amongst others.

The report also has it that Professor Adebola Adetula from the USA is also interested in the position.

In the same vein 11 people are also jostling for the position of the Registrar which became vacant when Dr Sunday Ayerun retired from office. Mr Opeoluwa Akinfemiwa presently function in the office as the Acting Registrar.