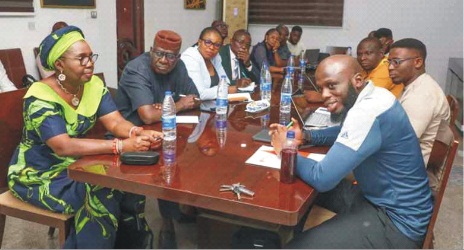 In a bid to provide accessible cancer care for victims of the  disease in Ondo state, the Governor, Arakurin Oluwarotimi Akeredolu,  has given his nod to the construction of a proposed state-owned cancer center.

The construction of the cancer center is about will  commence in a couple of weeks from now.

The Director General of Ondo State Performance and Project Monitoring Implementation Unit (PPIMU), Babajide Akeredolu, made this known during a meeting with stakeholders involved in the execution of the project, held at PPIMU Office in Alagbaka, Akure, the State capital.

According to him, the cancer centre was one of the legacy projects that Akeredolu-led administration was committed to, stating that the meeting became imperative as His Excellency had given the go-ahead for the project.

He applauded the Wife of the Governor and Founder of Breast Cancer Association of Nigeria, (BRECAN), Chief Betty Anyanwu-Akeredolu, who championed the vision of establishing cancer centre in Ondo State, couple of years ago.

He disclosed that a location had been secured and surveyed around the Federal Medical Centre, Owo, for the project, and fund made available for its take-off.

Giving a brief about the project, Mrs. Akeredolu who affirmed being the driving force for the project, attributed her passion for the establishment of the cancer centre to her experience with breast cancer and what it takes to access care.

She lamented difficulties encountered by victims to access treatment, especially traveling and accommodation fees required to access radiotherapy care outside the state, hence, the need for government to provide one.

She disclosed that, FMC was chosen to house the centre due to the fact that it’s already providing cancer care like surgery and chemotherapy, saying it’ll be more convenient to have a radiotherapy centre nearby to ease stress of patients that’ll need the service.

Mrs Akeredolu disclosed that lots of international cancer organisations were ready to partner the state for the smooth operation of the centre, especially on provision of needed equipment, noting that she was able to secure their partnership through BRECAN.

The State Commissioner for Health, Dr. Banji Ajaka, in his comment commended the First Lady for her passion towards ensuring that Ondo state has a cancer centre; while the Permanent Secretary of the ministry, Pharm. Aladenola noted that the project is positioned to be completed in record time to help alleviate the sufferings of cancer patients residing in Ondo state.

Presenting the technical project details, Mr Ife Awoyelu who is a technical adviser to the First Lady, explained that the project was a context appropriate cancer centre with basic functional systems.

He listed partnering organisations to include, Harvard and University of Washington, Radiating Hope, amongst others.

It is worthy of note that only nine  radiotherapy centres are available in Nigeria, and with the readiness of Governor Akeredolu to construct a cancer centre that’ll provide radiotherapy service, it makes the state first amongst its equal to achieve such feat in the healthcare provision.