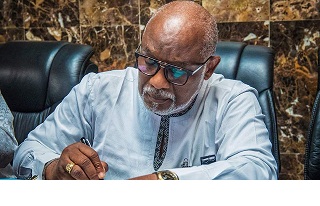 By Adekola Afolabi
|
Ondo State governor, Arakunrin Oluwarotimi Akeredolu yesterday assured the state public servants that his government would pay the N30, 000 new minimum wage before the end of January.

The governor who disclosed this in his New Year message to mark the first working day prayer held at the Governor’s Office premises, Alagbaka, Akure, also said apart from the new minimum wage, government would equally pay the arrears of leave bonuses in phases.

He particularly commended the workers in the state for their support and cooperation since his administration assumed office.

Akeredolu said the State is ready to pay the minimum wage, noting that it is a law and that the state is a law-abiding state.

He stressed that both the Organised Labour and government have been discussing, negotiating and fine-tuning conclusions to have most acceptable and sustainable salary structure considering the financial strength of the state.

The governor lauded the maturity of the labour leaders in their approach to the negotiation, urging them to sustain the same understanding in the days ahead.

Akeredolu explained that the first working day prayer as a tradition, was to welcome one another to work in the new year and appreciate God for his preservation and blessings in the outgone year 2019.

He stated that within a space of about three years, his administration has embarked on infrastructural development across the three senatorial districts of the state, while it has made improvement in revenue generation.

“We have stepped up and widened our empowerment schemes for women, men and young entrepreneurs by providing trade support loans. Above all, we have ensured peace and order in the state. In doing all of these and more, we have kept faith with the demands of workers’ welfare.

“In spite of our dire financial challenges, we have been able to fulfil our promises of regular payment of workers’ salaries and other obligations to the people of the State. I always hold the firm belief that regular salary payment and promotion of deserving public servants are obligatory. You can bear testimony that we have almost concluded the payment of inherited salary arrears,” the governor stressed.

On the forthcoming governorship election in the state, the governor advised civil servants not to wear any political party uniform including that of his party, saying he did not believe in politicising civil service in the state.

Akeredolu, however, said he would ride on the wings of the civil servants in the new year, soliciting for more support and cooperation, especially as the governorship election approaches.

He also commended the religious leaders for their constant prayers, saying it is their prayers that have been sustaining him and the state at large.

He noted that in the new year, “our collective resolution must revolve around the singular focus of making our dear state great.

“That is, great in revenue generation by looking inward for more innovative ways to create wealth; great in infrastructural delivery; great in provision of quality health care and education; great in rural transformation; great in creating solid economic commanding heights; great in service delivery and above all, great in peace and tranquillity.

“At every turn in the course of the year, let us keep evaluating our actions to see how genuinely committed we are on our duty posts to the cause of making our state great. I urge the bureaucracy to keep being a good partner in our developmental drive.”

In his words of exaltation, the Catholic Bishop of Ondo, Jude Arogundade, encouraged government to always pursue the purpose for which it was elected into office which is to develop the state and the people, saying leadership is about purpose.

He also called on the governor to summon Ondo State citizens with a view to further creating wealth for the good and betterment of all.

Earlier, in his remarks, the Ondo state Head of Service, Mr. Dare Aragbaiye, appreciated governor Akeredolu for prioritising the welfare of workers in the state, saying the support of Akeredolu-led administration in motivating the bureaucracy and charting the way forward for its effectiveness is tremendous.

He also reminded the public servants of the necessity to discharge their duties effectively and efficiently, as hands and brains behinds government business.