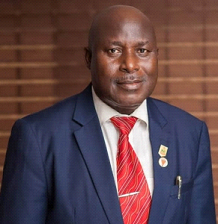 Performance Management Template that will form the basis for proper documentation of effectiveness of change ambassadors of the Ondo Service Improvement Programme (ODSIP) is in the pipeline.

The template will encourage efficient service delivery and policy implementation

The Head of Service, Pastor Niran Adeyemo disclosed this yesterday during his address at the eight quarterly interactive session with ODSIP change ambassadors in Akure.

According to him, it will serve as yardstick for the continuity of the ambassadors, stating that it will assist in evaluating them in respect of the change and transformation put in place at their various MDAs.

While noting that the forum has availed the opportunity to interact as ambassadors of transformation, coordinate and proffer solutions to the challenges they face at their respective MDAs, he explained that it was the responsibility of change ambassadors to continually strife to bring improvement to their works saying “you must ensure a well functioning government in all sectors and at all levels.”

Adeyemo who assured of  support for the improvement of ODSIP culture, charged them  to work with passion, adding that they should see themselves as the chosen ones in their various MDAs.

Welcoming participants to the event, Administrative Secretary, Department of Public Service Reform and Development, Mr Adewale Omomowo hinted that the office had put in place certain programmes for the year which according to him will improve efficient service delivery in the state.

He charged change ambassadors to always notify the reform office officially in case of posting for proper documentation.

He commended the governor, Arakunrin Oluwarotimi Akeredolu for his unflinching support which according to him has brought improvement to the programme.

In a lecture titled; “Social equity in governance”, the resource person and Special Adviser to the governor on Gender, Mrs Olamide Falana stressed the need for women to change their mindset as the world was changing.

She explained that government organisations have  special obligation to be fair in pursuing social equity with both employees and the public.

According to her, social equity was about giving without holding back, saying, “it is impartiality, fairness and justice for all people in social policy. It takes into account systemic inequalities to ensure that everyone in the community have access to the same opportunities and outcomes.”

In another lecture, Mr Stephen Aworere took the gathering on “public engagement” noting that in the state, government work with civil societies to create action plans.

According to him, a lot of community based organisations were interested in what change agents were doing noting that it was important that information was released to them at the appropriate quarter.

“Data that should be available in public space should be put there”, he said.

While noting that openness and transparency will bring about fiscal peace as openness foster good understanding between government and the governed, he charged change agents on the need to key-in into policy open governance partnership.