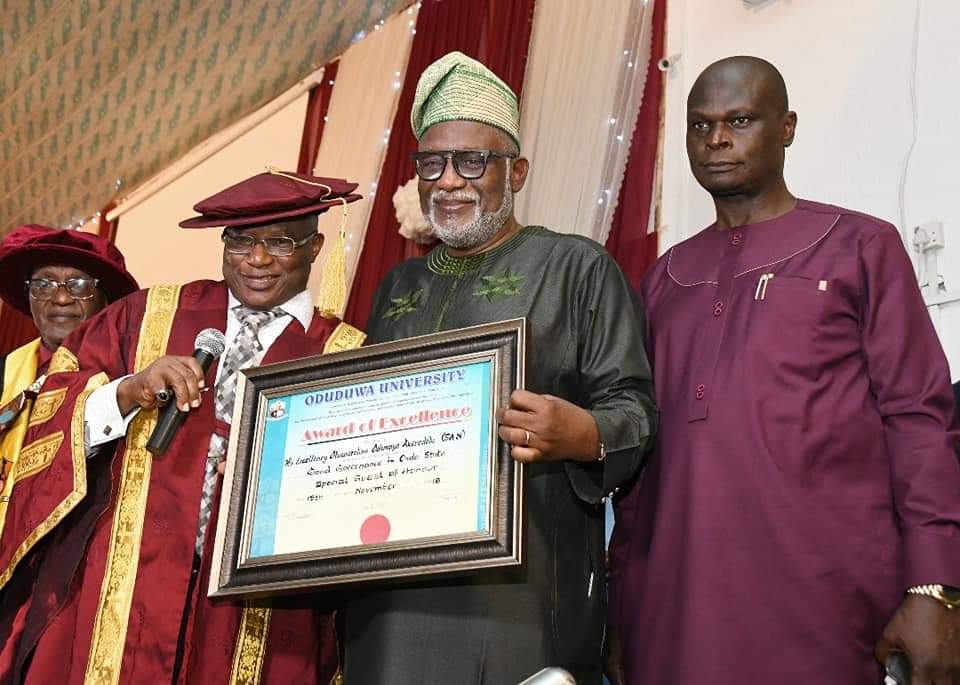 Akeredolu was honored at the 6th convocation ceremony of the university held at the institution’s premises, Ipetumodu, Osun State yesterday.

Founder and President, Oduduwa University, Dr Ramon Adedoyin commended the Governor’s various interventions in all sectors and for providing good road networks in all the Senatorial Districts of the state which has further transformed the Sunshine State.

Adedoyin who lauded the Governor for making the welfare of his workers his top priority, described him as one of those who are noted for regular payment of worker’s salaries and entitlements.

He appealed to the federal government to ensure stable electricity  in order to save universities from the huge amount of money spent on diesels to power their generating sets.

Adedoyin who noted that the university is determined to produce manpower that would compete favorably with its counterparts globally, enjoined the graduating students to keep up the virtues and values inculcated in them.

As the 2019 general elections approach, he advised Nigerians to shun politics of acrimony, witchunting, brigandage and violence which can plunge the nation into political turbulence and societal unrest.

Responding, Akeredolu thanked the President of the institution and the university community for recognising his little efforts hence the honour.

He said his administration is highly committed and determined to continually deliver his election promises made to the good people of the state with a view to justifying the confidence reposed in him.

Akeredolu lauded him for his vision to establish the great citadel of learning and thereby contributing to the development of education in the country.

While congratulating the graduating students, Akeredolu who described them as worthy in learning and character charged them to be good ambassadors of the University.

Vice Chancellor of the University, Prof Chibuzo Nwoke said out of the total number of 643 are being convocated 24 graduated with first class honours

He hinted that the institution is noted for greatness, said its quest to concentrate on human capital development is unwavering and steady.

He commended the graduating students for justifying the huge amount invested on them by their parents and enjoined them to be worthy ambassadors of the University wherever they find themselves.