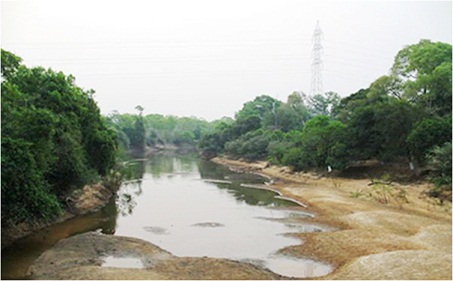 River Niger flows through a total length of about 4100 kilometres, and is the third longest river in Africa, after the Nile and the Congo-Zaire rivers, waltzing through ten countries. About one hundred and ten people struggle for survival in the river’s basin, but things changed, and the river shrank by one third in the last thirty years alone.

One morning in 2016, many Lagos and Ogun residents barricaded the Kara area along the Lagos-Ibadan Expressway — a 2.5-kilometre walk from Berger Bus stop, Lagos — to gape at  stretch of the Ogun River, which  overnight allowed the water hyacinths to sprout in its midst, a sign of a shrinking river.

Located in Northern Central Africa, Lake Chad borders four countries — Chad, Nigeria, Niger and Cameroon, but its basin encompasses almost eight percent of the Africa continent, stretching into three others: Algeria, Central African Republic, and Libya. Normally, when the surface of the lake hovers  approximately 920 feet (280 meters) above sea level, its area covers about 6,875 square miles (17,800 square km). But it shrank in the early 21st century, and the lake covers just  about 580 square miles (1,500 square km), meaning over the past 60 years, the lake shrunk by as much as 90 percent.

Major rivers and lakes in Nigeria suffer the challenge of shrinking. Apart from the River Niger, some parts of River Benue experience the same phenomenon. Okhoro River, one of the major rivers in Benin City, shrank by almost ninety percent in thirty years. Today, not unlike the Ogun River, grasses and water hyacinth-like plants cover an area behind the Ikpoba dam on the river, an area once teeming with water and fish and aquatic plants.  The Hadejia-Nguru wetland accommodated a large green smudge on the edge of the Sahara in northeast Nigeria, Today, the wetland shrank to one-fifth of its size, destroying its natural bounty and the way of life that went with it. Major rivers covered about 10,812,400 hectares, which make up 11.5% of the total surface area of the country, estimated to be approximately 94,185,000 hectares, but they shrink with the passage of the years.

Climate variability impacts on water stress, creating a decrease in the quality and quantity of surface water, as well as the drying up of rivers and lakes, wrote Vincent Ojeh, the lead author of a research study on the topic. New research on the Niger River Basin finds that the effects of climate change constitute a challenge on the river, destabilizing communities by adding uncertainty and stress. Climate change influences the water balance components of River Ogun, creating recurrent dry spells in the years 1988, 1990, 1998, 2006 and 2009, wrote A. O. Eruola, a lead author of a research work on the river.

In addition, the Hadejia-Nguru Wetlands may have shrunken by as much as two-thirds in the past 30-40 years through diversions from dams, irrigation developments and drought, said a report. Definitely, the Okhoro River began to shrink soon after the construction of the Ikpoba dam, which took place so many years ago. As for the River Niger, the impact of dams constructed in neighboring countries disturbed its flow.

Experts usually cite the impact of the construction of dams as responsible for the drying off of rivers such as the Okhoro River, the Hadejia-Nguru wetlands, and the River River. However, they increasing accuse climate change for the phenomenon, or a combination of both for a situation where rivers in Nigeria run dry. Also, the geological settings of the region coupled with the semi-arid region make northeast Nigeria exposed to the risk of low rainfall, which is approximately 600 mm per annum.

Governments of the affected countries now battle on several fronts around Lake Chad soon after the drying out of the lake accelerated, with herders turning into terrorists in order to survive.  A joint multinational task force made up of troops from Nigeria, Niger, Cameroon, Chad, and Benin continues to launch military strikes against the terrorists. The widespread violence leaves 10.7 million people across the Lake Chad region in need of emergency assistance . Two million and three hundred thousand people across the region face displacement. Over five million struggle to access enough food to survive, while half a million children suffer from severe acute malnutrition, said UN Deputy Secretary-General Amina Mohammed during a high-level event on the humanitarian situation in the region.

With the rivers running dry and rainfalls decreasing, 26.5 million Nigerian children – or 29 per cent  of their population – experience high or extremely high water vulnerability, according to a World Bank report.  The current water supply covers just 40-50 % in the rural areas, since most of the  rivers, streams, dams, lakes, etc exist in a state of jeopardy, due to climatic changes and other factors, wrote  Y. N. Lohdip,  a lead author of a research on water bodies in Nigeria and a lecturer at the Department of Chemistry, University of Jos, Nigeria. Sixty million Nigerians, or 33 percent of the population, lack an access to clean water, and since they depend on sources such as river water, they find themselves in a dire need for water.

More than 1.5 million people lived by fishing on Hadejia-Nguru Wetlands, others grazing their cattle on its wet pastures, and farmers irrigating their crops from its complex network of natural channels and lakes. But with the wetland going dry, the farmers, fishermen and cattle hustlers  lost their source of livelihoods, heading for Kano and joining the Islamic terrorist group Boko Haram. At the Okhoro River in Benin City, fishermen suddenly found themselves jobless.

With fishermen finding themselves out of jobs, the fishing sector got affected.  The total fish demand for Nigeria based on the 2014 population estimates stands at 3.32m metric tonnes annually, according to the UN Food and Agricultural Organisation. Even with a domestic fish production from aquaculture, artisanal and industrial fisheries for 2014 standing at 1.123m metric tons, a fish supply gap of 2.197 million metric tons still exists, as the contribution from the nation’s rivers and lakes dwindled.

The World Bank, African Development Bank (AfDB) and other partners should support the activation of a fund pledged for land restoration, tree planting, development of climate resilience infrastructure and investments in small and medium-sized farms, as a way to cope with the challenge of rivers and lakes running dry in Nigeria, said President Mohammadu Buhari recently.

Whether this solves the problem is another issue altogether.