Of war between wives and mothers-in-law 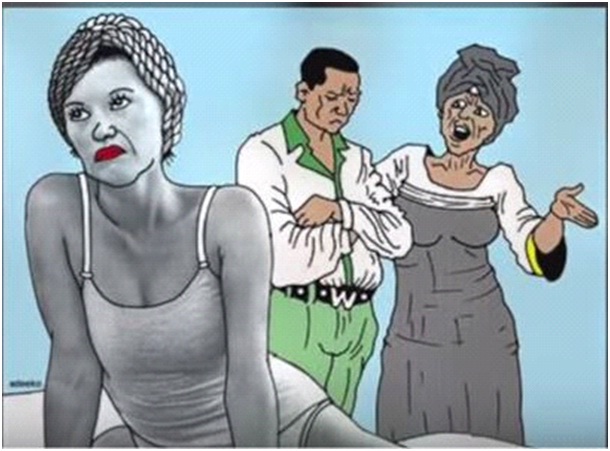 From one generation to the other, it has become a natural phenomenon for wives and mothers-in-law not to see eye to eye. While some mothers-in-law find it hard to relinquish the control of their son to the wife, some ladies also feel that they should be left alone to enjoy matrimony with their husbands.
By this, many wives and mothers-in-law are often at loggerheads because they could not manage the crisis between them. The poor man is often felt hen picked between the two women in his world.
At the beginning of their union, about 70 % of wives and mothers-in-law grow to dislike each other and the conflict often snowball into crisis.
Such is the case of a family. The conflict between the wife and the mother in law was aggravated by the childlessness of the couple and eventually put the marriage asunder.
Olanike and Adeoye (not real names) did not have a child after 7 years of marriage. The wife was already growing terribly concerned after several years of union and no issue to show.
She went to seek spiritual help from a Prophet who told her that her mother-in-law was the witch that blocked her from having the fruit of the womb.
It was a terrible day when the mother in law came to visit them. The wife was already spoiling for a fight
The mother in law who had been pressuring the wife on the need for her to find a solution to her barrenness got more than she bargained for as the wife practically flew at her face.
She confronted her mother in-law with the secret divulged to her by the prophet while shouting at the top of her voice
“I knew it! I knew you were behind my troubles. I knew you never meant me well because I am not from your area. But today, mama, you will kill me today. Why now? You have your own children but you do not want me to have mine. What did I ever do to you? You have destroyed my life. God will judge! He will surely judge between me and you. He will not allow you to destroy my life.”
People who had never heard the woman raise her voice before were alarmed by her outburst. As you know, bad news travel fast. Residents were round-eyed with amazement as the young woman assaulted her mother in law.
A Good Samaritan who saw her man handling the old woman had called her husband who came home swiftly.
People had gathered to watch their show of shame while some of the people gathered made to separate the wife from her mother-in-law. The husband was like one demented when he burst in.
He grabbed his wife roughly by the arm and demanded in an angry voice “this woman, what is the problem? Why are you rough handling my mother? Do you want to kill her?” The crowd gasped audibly and the mother in law sobbed heartbrokenly when the woman repeated her allegations.
T h e husband saw red and dealt her a stinging blow on the cheeks. lt was a terrible day that marked the beginning of a reign of terror in their marriage. Rarely does a fortnight go by without the couple beating themselves black and blue.
T h e husband was easily provoked and he beats his wife mercilessly at the slightest provocation.
The wife too had learnt to fight with her nails and teeth, so both of them became bitter enemies. Concerned people tried to settle their misunderstanding but none of them was willing to listen to each other except to flung terrible words at each other.
It was after the wife calmed down that she remembered what the prophet gave her to use with her husband. She tried to draw her husband’s attention so they could make love to consolidate the treatment she had been given. She had enormous hope in the prophet that her husband sexual meeting with her after that will lead to pregnancy.
Unfortunately, the man was too angry to listen to reason; he laughed harshly and asked “me? Sleep with you again after all you have done?” The woman was now remorseful and she tried to pacify her husband but he refused to listen to her pleas.
This led to an ugly development that led to their eventual separation. The husband’s refusal to perform his husbandly rights led to her having an extramarital affair and horror of all horrors! she got pregnant. lt was like a nightmare. Though she was happy at the notion of the tiny life growing inside of her, she regretted her waywardness and decided to pack out of her husband’s house.
The man got to his house one day and discovered his wife gone with all her belongings. He thought ”good riddance to bad rubbish” but when he discovered her to be pregnant despite the fact that he had denied her sex for up to six months, he was shocked.
He knew without been told that he was not responsible for h e r pregnancy. It was a terrible time for the man as he walked about like a lost soul.
He did not realize that the problems he was having with his wife could lead to her been snatched away by another man. To compound the shock, she was also pregnant while he had been trying for years to achieve similar feat without any success.