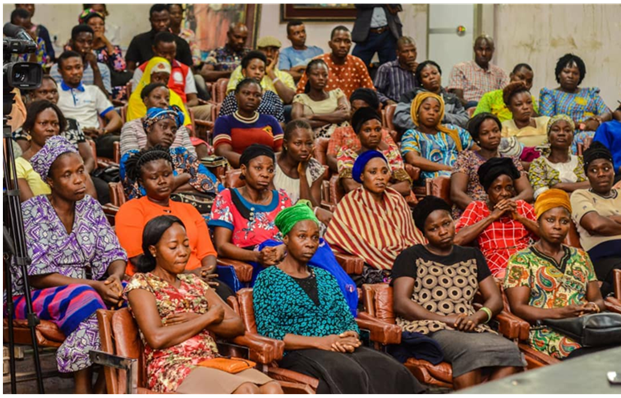 By Evelyn Omotoye
|
Relief and smiles came the way of 76 victims of the inferno which gutted shops at the Post Office area in Akure, as the Ondo state government yesterday gave them N26 million, to cushion the effect of the disaster.

Unlike the forlorn look they wore last June, when their properties were gutted, many of the beneficiaries danced and rejoiced as they got the money.

The beneficiaries were full of praises as they were invited one after the other by the Deputy Governor of the state, Mr Agboola Ajayi, whose office is in charge of the State Emergency Management Agency (SEMA) to receive their cash.

At the event which took place at the Cocoa Conference Hall and witnessed by the Deji of Akure, Oba Ogunlade Aladetoyinbo the beneficiaries  commended the Akeredolu administration for its urgency with each of the beneficiaries going home with the sum of N500,000 and N200,000 each .

Disbursing the cash to the victims, Ajayi, said the Akeredolu-led administration is always ready to give succour to victims of any form of disaster or the other in the state, as prompt as possible.

He said: “The ultimate responsibility of the government is to protect the lives and property of the people and to be responsive to their yearnings, one of which is to come to their aid in case of emergency or disaster.

“There is no amount of money that can be given to  the victims. But the government is giving this out this cash as a palliative to relieve them of their losses for them to return to their businesses and give them means of livelihood”, he stated.

Ajayi commended the Deji of Akure lands for liasing with the government on the issues since the incident happened, thanking him for his good representation and show of responsibility for his subjects.

He, however, warned shop owners in market places to be more careful with electrical appliances and whatever thing that may trigger fire outbreak or cause any form of massive destruction in future.

He reiterated the commitment of the present government in the state to continue to give succour to its people and safeguard the lives and property of its people.

In his remarks, the Deji of Akure, HRM Oba Aladelusi Aladetoyinbo, appreciated the government for. its good gesture and for fulfiling the promise it made during its inspection to the fire scene.

He, therefore urged the beneficiaries to make good use of the money given them and return to their normal businesses to make ends meet.

Earlier, the SEMA Secretary, Mr. Abiodun, stated that the agency is constituted to respond promptly to any form of emergency, accident or disaster in the state and liase with the government on how to give relief to victims of such incidents

One of the beneficiaries, Pastor Bisi Bakare, gave kudos to the Akeredolu government for the kind gesture, saying it is rather a reinforcement than just a palliative to make them bounce back to their businesses