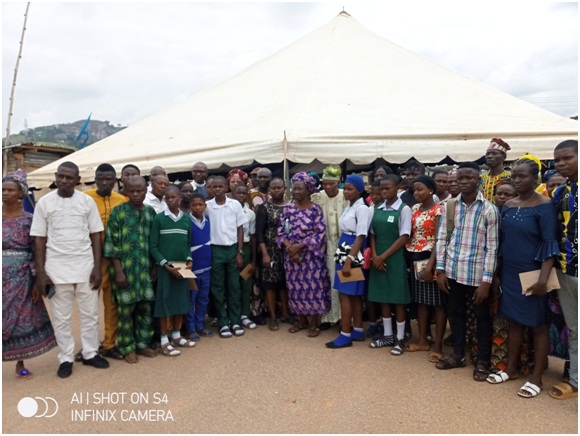 As a way of giving back to the society, the family of late Pa Cornelius Adebayo Ojifinni of Ijare in Ifedore Local government area of Ondo State has reeled out scholarship award worth a million naira to 22 indigent students of the community.
The programme is the second annual edition of the deceased scholarship award given out yearly in order to appreciate God for what the Lord has blessed him with while his children continue with the fetes.
The programme was held at the heart of the town where sons and daughters of the ancient community gathered not only to witness the scholarship ceremony but to celebrate the life and time of the late nonagenarian who people attested to lived a fulfilled life.
In his opening speech, Mr Olowo Ojifinni thanked God for the life well spent by the founder of the scholarship scheme whom he said died on February 10, 2021 but his legacy will linger for generations to come.
He cited the life of Hekezial who did something to challenge God and the result is evidence today for all to read.
“Our patriarch love for education culminated in his drive to motivate everyone around him to be educated”.
While saying that the greatest inheritance a parent can give to their ward is sound education,he charged the beneficiary as they progress in life, not to forget their roots.
Mr Funso Ebenezer Ojifinni, said the legacy of his late father would continue as he has instructed because while he was alive his passion for education is unwavering.
According to him, the vision was conceived by their late father sometimes last year when the entire children decided to celebrate his 90th birthday in which he declined, and said they should go to the town, and look for people who cannot afford to pay their school fees.
“Our father was so passionate about education and wanted everybody around him to be educated”
He was a father with a difference and a teacher who taught us personally saying that though he was not opportune to be so educated, but managed to read to standard six levels.
“Baba taught some of us who are graduating for degree examinations, maybe because he wasn’t opportune, not because his father was not rich; in fact our grandfather was rich in the local parlance.
“Our father did not just spend money on us, but spent his time and himself so that we can get to where we are today”.
He urged parents to emulate his father’s gesture by not only spending money, but their time and everything within their reach to see their wards become great in life.
Dr Rotimi Ojifinni, said the motive for the scholarship is to propagate the dream of his late father who cared so much about education and took it as utmost priority.
He said the scholarship award comprises both the secondary and tertiary students while requirements for the award is the best students in each class who must be an indigene of Ijare.
A daughter of the deceased, Mrs Owa Taiwo appreciated God for the success of the programme, saying that her late father will be happy in heaven.
She said as instructed by the father the scholarship award will continue beyond their generation.
A beneficiary of the scholarship, an undergraduate, Mr Ayobami Olowomeye, was elated for the gesture and appreciated the organiser of the programme saying this would complement his school fees.
Another beneficiary, a secondary school student, Ogundipe Lekan was happy and promised to do something like this to others when opportuned.
One of the beneficiaries parents, Mrs Olajide Rachel, thanked the entire Ojifinni family for the show of love extended to the whole community.
Mrs Fadele Juliana, who benefitted from the free health care service, also appreciated the gesture, saying late Pa Cornelius Adebayo Ojifinni was a nice man.
She said at a time when she could not afford to pay her last born school fees, it was baba who paid. She prayed God to uphold the family Baba left behind.