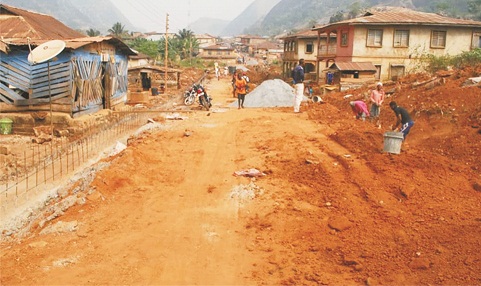 By Agbelusi Ganiyu B.
\
Ondo State Commissioner for Information and Orientation, Mr Yemi Olowolabi has assured that the one kilometer Oke-Jebu area of Idanre would be completed within a month.

Olowolabi gave the assurance shortly after an inspection of the road which began five days ago.

He disclosed that the project will not be slowed down due to paucity of funds because provision had been made for it.

Apart from the Oke-Jebu project, he said the roads leading to the palaces at Alade-Idanre and that of Oba Awosunye at Atosin Idanre were being given a face lift.

The commissioner lauded the state governor, Arakunrin Oluwarotimi for the ongoing road projects across the state, explaining that the road projects in the state were a fulfillment of the governor’s electioneering campaign to make Idanre a tourist haven and great centre of attraction.

Speaking with  The Hope Mr. Seun Aroso of the Ondo State Agency for Road Maintenance and Construction (OSAMCO), the company handling the project also affirmed that they would complete the project before the rain starts as the arrival of the rain would lead to  incurring avoidable expenses apart from wasting their time.

Chief Lakunrogho Omotayo Akinnadeju who is also the leader of all the blacksmiths in Idanre Kingdom described the road as a great gift for the people of Idanre and especially the people of Oke-Jebu area  and therefore praised Governor Arakunrin Akeredolu for keeping his promise to their people and lauded  Olowolabi for not forgetting his people after assuming office.

Also Professor Olatunji Akinsanmi, a U.S.A. based Idanre indigene, in a telephone call to The Hope poured encomiums on  Governor  Akeredolu and Olowolabi for the new Idanre to Akure road project and the Oke-Jebu road. According to him, such massive road projects taking place almost simultaneously in Idanre  Kingdom was unprecedent.