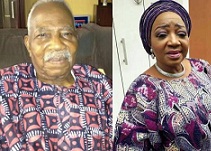 Suspects arrested in connection with the killing of late Mrs. Olakunori, daughter of Pa Reuben Fasoranti, are to face four count charge of conspiracy, kidnapping and murder and unlawful possession of firearms at the Ondo State High Court.
Magistrate Victoria Bob- Manuel of an Akure Chief Magistrate Court, announced the transfer of the case to the Higher Court following the advice of the Director of Public Prosecution in the state Ministry of Justice.
According to her, the outcome of the advice from the DPP stated that the four suspects are culpable of the offences against them which include conspiracy to murder, murder, armed robbery, unlawful possession and kidnapping.
The legal advice, it was learnt stated that the suspects have a case to answer, hence they are to face the charges at the High Court, since the lower court lacked jurisdiction to entertain the matter being a capital offence.
She said the offences contravened Sections 516 and 316 of the Criminal Laws of Ondo State, sections 3 and 5 of the Anti- Kidnapping Laws of the state and section 6 of the Robbery and Fireams Laws of Ondo State.
The Magistrate, therefore ordered the release of late Olakunri’s driver Femi Adeyemi and two others, Garuba Bello and Ahmad Yunus as recommended by the prosecution which had absolved them of complicity in the case.
She directed the police to intensify manhunt for the arrest of the remaining four fleeing members of the deadly gang responsible for many high profile murder in the country.
The state Attorney General and Commissioner for Justice, Mr. Kola Olawoye, SAN, who was in court to present the advice of the Director of Public Prosecution said necessary papers would be filed at the High Court for the immediate commencement of the case.
The Magistrate adjourned till June 24, 2020 for the final review of the post issuance of legal advice.
It would be recalled in April 24, 2020, that the four suspects; Auwal Abubakar, Muhammed Shehu Usman, Lawal Mazaje, Adamu Adamu and others at large were alleged to have killed Mrs Funke Olakunori in July 12, 2019 at the toll gate axis of Ore Sagamu, Express road.
They were consequently arraigned before the Chief Magistrate Court on four counts charge of conspiracy, murder and kidnapping. But they had no legal representation.
The state counsel, John Dada Joshua, then moved a motion on notice that the defendants be remanded at the Nigerian Correctional Service facility in Owo, pending the issuance of legal advice from the office of the DPP.