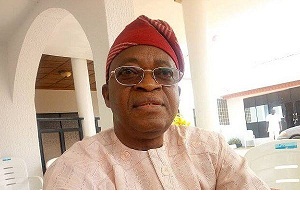 From Fisayo Akinduro, Osogbo
|
In a bid to give back to the society, some Alumni of Ifeoluwa Middle School, Osogbo, have concluded plans to build an assembly hall for the school.

The old students, who visited the school, said that there is need for the school to have an assembly hall, hence the need to renovate the old dining room and kitchen of the school as the new assembly hall.

While speaking, the concerned old students said they visited the school to enable them have first-hand information for proper assessment of where old students could assist in repairing dilapidated structures or providing new amenities that the school might lack.

Samuel Ayoade, member of the 1964/68 set who led the visiting team saluted the courage and resilience of some members who were present at the meeting.

He charged the old students to see from the perspective of a school in Ilesa whose Alumni donated the chemistry laboratory, repaired the teachers’ quarters,  provided a modern lawn tennis court and hockey field.

“We should renovate the ruined dining room, see this school as our path and its existence should be our happenings.

“Some Alumni of a school in Ilesa refurbished the Chemistry lab, repaired the teachers’ quarters,  provided a modern lawn tennis court, provided the hockey field to mention but a few. We can also match these if we are more serious and focused.”

Oladosu Gidigbi, a 67/71 set of the school, described the project as the act of giving back to the society.

According to him, he asserted that the school had made them and some of them have reached high in their various professions.

He added that visiting the alma mater and embarking on the renovation projects will also help the government of the state which the governor, Gboyega Oyetola happened to be part of alumni.

“We should give back to the school that made us, we have reached high in our choosing professions. We thought it is fit to come back here to assist the government by giving back to our alma mater.

“If you look at all the schools that the former governor, Rauf Aregbesola built, he made provision for Assembly halls which are well equipped, but not in Ifeoluwa. There are three middle schools that Aregbesola merged to Ifeoluwa.”

Some of the past students who were part of the visiting team are Pastor Adesoji Ajibade, set of 72/73, Araoye Segilola 73/77 and Owolabi Owoborode 82/87 set.