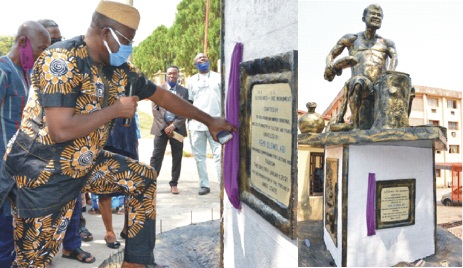 Ondo State Ministry of Culture and Tourism yesterday unveiled the “Oloolu Sculpture” to promote the existence of the traditional weaving and dry cleaning of Aso oke which is already going into extinction.
Unveiling the sculpture, the Commissioner of the Ministry, Mr Yemi Olowolabi said the ‘Oloolu sculpture’ is to celebrate the distinct profession, their contributions to the maintenance of the distinct culture.
While describing the sculpture as a masterpiece, the Commissioner said it is not only to promote the Ministry but to preserve the cultural heritage of the Yorubas.
According to him:” Many of our youths do not know what Aso Oke means, they just want to wear it for their weddings but with this amazing celebration of our culture, it reminds us that this is how this precious cloth are maintained and preserved.
He also called on private investors to invest in tourism centers in Ondo state so as to make them attractive to tourists all over the world.
Earlier, in her keynote address, the Permanent Secretary, Mrs Bola Akinyanmi said the technique used for sculpting the project is known as”Direct Plastering” using mortar which means mixing of cement and sand as the medium expression.
She gave the dimension of the sculpture as,geographical height,10ft 6 inches, Anatomical height,14ft 6 inches, Pedestal(5 by 5)ft square by 7 height.
She said the composition also involved the traditional attributes of those in the profession in the olden days, taking palmwine as stress relief during the dry cleaning process.
The PermSec also commended the Commissioner who has vowed never to leave any project abandoned, saying that the project has indeed been delivered.
The former Permanent Secretary, of the Ministry, Alhaji Bode Yusuf who said he was elated as the project started while he was there, posited that with the sculpture, the ministry can now be called the Ministry of Culture and Tourism with the gigantic sculpture.
In his welcome address, the Director of Arts, Museum and Monument, Pastor Michael Jemilugba said the project which started a year ago faced a lot of challenges during the last administration, adding that executing the project by the department is a long awaited one.