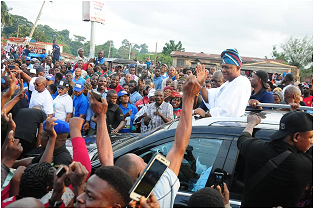 It was a tumultuous home coming for the Olowo-elect, Prince Ajibaderinwa Gbadegesin Ogunoye last night as he made a triumphant entry to his home town Owo to begin installation rites as the new Olowo of Owo.

Prince Ogunoye, 53, bowed out of the Ondo State Civil Service yesterday as a Permanent Secretary. Thousands of well wishers gorgeously attired clustered the Owo-Emure junction to welcome the crowned prince.

The Hope also learnt that relations, societies, age grades and associations have also joined the celebration train as they have gone to purchase aso ebi (uniforms) in commemoration of the coronation.

The Olowo’s Palace otherwise known as Aghofen reputed to be the biggest palace in Africa has been given fresh coat of colours.

The palace with about 100 courtyards (Ughas) with a specific function, each dedicated to a deity has undergone massive renovation when our reporter visited the palace yesterday.

Also renovated is Usama where the new Olowo is expected to live for three months for tutelage.

Traders at the Ogwata market could not hide their feelings as they expressed joy at the news of their return to the Oja Oba market where they were relocated from.

The duo of Mrs Felicia Odunayo and Ogunmola Titilayo while expressing their pleasure over the development however called on government to start the expansion of the Oja Oba market, saying it can no longer accommodate traders who have increased in number.

Speaking on the ceremony, Chief Sidney Ogunleye described the emergence of Prince Ajibade as unique.

Ogunleye who is also the Alajagho Odudu of Iloro, Owo said his reign will bring peace, unity and development to the ancient town.

The Alajagho Odudu however enjoined the people to eschew violence during and after the installation.

He equally appealed to the people to allow room for peace as no development can take palace in an atmosphere devoid of peace.

On his own, Chief Jamiu Ekungba, the Ekon Odo Agbara of Owo and the Spokesman of the Council of Senior Omolowos also charged people of the town to celebrate with peace.

He stated this during his visit to the palace.

After the valedictory, he departed to Owo for the commencement of installation rites.

At the valedictory ceremony held at Governor’s Office, Akure, the Ondo state Governor, Arakunrin Oluwarotimi Akeredolu, congratulated the Olowo-elect and wished him well as he ascended the throne of Olowo.

Akeredolu who was represented by his Chief of Staff, Chief  Olugbenga Ale, explained that the peaceful selection process of the Olowo-elect was a big relief and comfort to the government and the people of Owo kingdom.

He thanked the senior Omo-Olowos and the kingmakers for the peaceful selection processes which culminated in the emergence of the new Olowo-elect.

In his remarks, the Head of Service of Ondo State, Dare Aragbaiye, congratulated the new monarch, saying this is the first time in the history of the state that a serving Permanent Secretary would be selected as Olowo of Owo Kingdom.

He described the Olowo-elect as a dedicated and dutiful officer with high integrity who added value to the state public service.

“He contributed immensely to the growth and development of the civil service. Everywhere he served he left his mark, and we are proud of him,” Aragbaiye said.

Speaking at the event, the Olowo-elect, Prince Gbadegesin Ogunoye, who appreciated the governor for appointing him as Permanent Secretary in the state civil service, said that his journey in the system has adequately equipped him with wide range of experience in the areas of service to the people.

Ogunoye who described Owo as a service conscious town such that he who is so recognised by the town would excel at any level of governance,

He promised to be a good representative of Ondo state civil service and as well as the people of Owo kingdom.